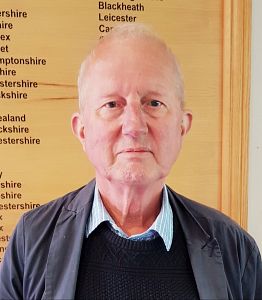 It was interesting for our Club Members to hear retired press photographer Martin Mayer give us a talk about his life and career during our lunch meeting on 12 June.

Martin first got involved with newspapers and photography while he was at university in the 1960s (at the time of the Vietnam War). He’d become involved with a group there that went on to found a newspaper that reflected their left-wing views. Martin had been asked to take photographs for the paper and so had the chance to be present - and record - many important events of the 1970s.

After working for two or three of the smaller papers during the 1970s, Martin went on to work for a number of main titles from the 1980s onwards. All of his earlier work is in black & white, much of it showing a gritty realism. Sadly, he doesn’t have access his later work, so his talk focused on his early images (for which he still has negatives).

Martin had collected together a chronological collage of about 50 of his earlier pictures which were projected for us to see. Most of these showed “heavy duty” political scenes of strikes, riots and strife. But a few were more light-hearted and about everyday life; in retrospect he wished he’d taken more of the latter.

Martin talked us through his collection, starting with pictures from 1968 of the “Cod Wars” with Iceland. In one picture we saw Hull fish docks with boats tied up; in another we saw two mothers with rollers in their hair walking through the deserted docks, pushing babies in high prams.

A picture from the 1970 general election showed a keen-looking Edward Heath (leader of the Conservatives, who went on to win), while a separate shot showed politician Enoch Powell (then still a Conservative), arm raised in the course of one of his speeches. Another picture showed Labour leader Harold Wilson, looking optimistic at the outset - and deputy leader George Brown.

Taken in Belfast, one of Martin’s photos showed a determined Ian Paisley, founder of the DUP, resolutely opposed to any settlement with the Catholics - and Bernadette Devlin, elected MP for Mid Ulster.

Martin had also taken some pictures of Northern Wakes Week, just before the election. Wakes Week was still going on at the time, but dying out – it was when mills and factories in entire towns closed for an annual week’s holiday. Many went to Blackpool, and Martin’s pictures showed market town Ashton-under-Lyne. One picture showed a scene of families boarding coaches while another, taken later, showed the beach - with the “father” in his collar and tie.

Martin related how, under Heath, inflation shot up leading to agitation for higher wages in all sectors. Council workers’ held strikes, and Martin showed shots of rubbish in the streets, print workers in Fleet Street, a big postal strike, and 50,000 striking Ford workers at Dagenham. He told how matters were made worse by the Yom Kippur War between Egypt and Israel which resulted in a four-fold increase in oil prices. Businesses were failing, with workers sometimes occupying factories and workplaces. One of these was upper Clyde Shipyard, also pictured by Martin.

Industries were gradually changing. London Docks were still operating at the time, and Martin showed dockers at a muster point for work and lounging about in the docks. Containerisation was rapidly spreading, and Martin had taken photos of riverside warehouses and cranes being demolished just upstream of Tower Bridge.

Martin also recorded images of slum clearance programmes in full swing. He showed pictures of demolition in Liverpool - and the unfortunate high rise replacements in Everton.

In Northern Ireland the Troubles had led the government to introduce internment without trial in the “H” blocks. Martin’s pictures showed anxious looking soldiers in Belfast, soldiers being stoned by a mob in Bogside, the “no go” area, “Free Derry”, and Protestants throwing people out of their houses from a Catholic enclave in South Belfast. The violence came to mainland Britain and Martin had one photo that showed the bomb devastation at Canary Wharf.

Martin told us how the miners had become used to higher than average pay, but as a result of inflation, that, in effect, had slipped back by the early 70s. The 1972 strike won a big pay increase and his shots showed confident miners, as well as school kids, in front of a pit head in South Wales. He also showed lines of pickets – and a picture of a 90 year old gent outside his home in a row of condemned National Coal Board (NCB) cottages. Martin also had images from the 1973 Lofthouse Colliery disaster – showing exhausted rescue workers following the mining tragedy in which 12 people died.

By way of a contrast, Martin showed a picture of retired army officers in their bowler hats protesting about their pensions, and Ascot racegoers in their morning suits and top hats trying to ignore stable lads picketing in support of their strike. A shot at Betshanger Colliery in Kent showed a graph indicating plunging production, and another showed South Yorkshire strikers trying to picket Battersea Power Station.

In 1974, Heath called an election and pictures showed Wilson and James Callaghan – the winners by a narrow margin. However, troubles continued and shots showed striking power station workers, and illustrated the “winter of discontent” in the late 1970s (following which Thatcher was elected). Other pictures showed a demonstration against the National Front by anti-Fascists, Callaghan arriving for the Lord Mayor’s banquet, politician Tony Benn campaigning against membership of the EC, the IRA bombing campaign in London, and Mary Whitehouse campaigning against pornography.

Further shots from the end of the 1970s and early 1980s showed Vietnam War protests, the OZ obscenity trial, the Jeremy Thorpe attempted murder trial, and the first of the new “Goodies” comedy TV series.

Martin started his freelance work in 1983, and he went on to work for the Sunday Times, the Guardian and the Independent. In 1984, he was in Brighton for the Conservative Party conference, and one of his photos showed shocked people outside the hotel which the IRA had bombed; we also saw pictures of a grim faced Thatcher, William Whitlelaw and Selwyn Gummer taken around then.

Martin’s talk was certainly a walk down memory lane for many of us – as reiterated by Rtn Andrew Barchi when summarising the talk and presentation. Vice President Margaret Griffin gave the vote of thanks on behalf of our members.