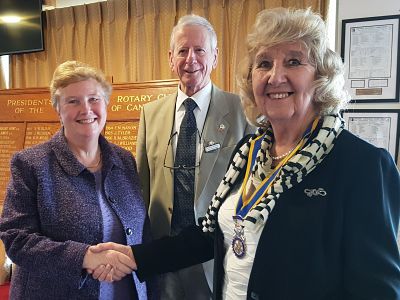 Once again it was a great pleasure to welcome a new member to our Club, Maxine Blades, following her induction by President Margaret Griffin at our lunchtime meeting on Tuesday.

Maxine is a specialist in Human Resources (or 'personnel') and was nominated by Rotarian Andrew Barchi; both live in Stelling Minnis. During his introduction, Andrew joked that Maxine has promised to work "24 hours a day" - but we don't really think that much dedication is needed! During the induction President Margaret described joining Rotary as a life changing - or life enhancing - moment, and stated that "it's always true that if you want to have friends you have to be friendly". She also reminded us of the Rotary motto - "Service above self" - and described the two aspects of the Rotary wheel - inwards towards the Club, and outwards towards the community.

Maxine is married to Kevin, a Finance Director with IMI, and has two daughters – Andrea and Lauren. Regular visitors to our website may recall that we hosted a Mini Group Study Exchange (MGSE) last summer; Maxine's daughter, Andrea, was one of the young people that was selected locally.

Members warmly welcomed Maxine to the Club and after the meeting Maxine gave some more information about her life and career.

She spent her early life in Bexleyheath but recalls coming on holiday every year to Herne Bay and Canterbury as a child, staying with her grandmother in Herne. Maxine also studied at the University of Kent and graduated in 1979 with a BA in Industrial Relations. She later moved to Cambridge and joined Spicers Ltd as Personnel Officer for their factories - making envelopes, books and note pads - and their newly established stationary wholesale business.

In 1989 Maxine joined the Anglia Business School, teaching Human Resource Management (HRM) modules on management development programmes in Cambridge and Chelmsford. In 1993 Maxine completed an MA in HRM at the University of Westminster and was appointed a Chartered Member of Chartered Institute of Personnel Management (CIPD).

Maxine spent a four year maternity leave in Connecticut USA, where Kevin was CEO of a cosmetic packaging business. Lauren was born in Connecticut. In 2001 Maxine returned to UK and joined De Montfort University in Bedford as programme leader for the CIPD Postgraduate Diploma programme and in 2004 she relocated with her family to Stelling Minnis to be closer to parents. She later joined Canterbury Christ Church University (CCCU) as Programme Director for Postgraduate Studies in HRM. Between 2006 and 2012 Maxine chaired the Kent Branch of CIPD. She retired from CCCU in October 2016 on her 60th birthday.

Remarkably, Maxine also found time to be a Brown Owl for Bossingham Brownies from 2004 – 2016. She now spends her time writing articles for HR magazines, she sits on the Committee for Canterbury Trefoil Guild, is Chair of Governors at Stelling Minnis CoE Primary School and is busy raising funds for refurbishment of St Peter and St Paul Parish Church in Lower Hardres.

She said she is looking forward to working with colleagues at Canterbury Rotary and also to meeting members of the Rotary Clube de Silves, (Algarve) where she and Kevin often visit.