A meeting with a difference 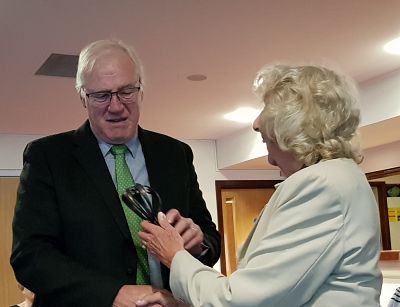 We had a lunchtime meeting with a bit of a difference yesterday - a celebration, an award and several visitors too!

Lunchtime meetings are usually a time to listen to interesting speakers, have a catch-up with fellow Rotarians and enjoy good food together. Well we had all of this in our meeting yesterday - with a slight difference.

First off, we welcomed Rotarian Marjorie Lyle and her husband Lawrence to the gathering and celebrated their upcoming 70th wedding anniversary with a gift from our members of a bouquet of flowers and a bottle of wine, presented by Rotarian Deborah Connolly. (We already marked Marjorie and Lawrence's anniversary to some extent at our Valentine's event, when we celebrated all things with a Valentine theme.) Marjorie thanked us for the gifts and also for the "whole new lease of life" Rotary had given her - she'd joined the club 12 years ago after having a series of serious illnesses and found the club gave her "lots of love and support" for which she thanked everyone. Lawrence wryly advised us that "the basis of a happy and long marriage has roughly the same spirit as behind Rotary: 'Service above self'!" Both Marjorie and Lawrence received a round of applause for having reached such a marvellous milestone; we wish them both many more happy years together.

Next up, Past President Margaret Griffin got up to give an award to Rtn Lewis Norris who, until the handover this year to Rtn Stephen Thompson, has worked steadfastly behind the scenes as the Club's treasurer. The award - given for a year and started by one of our Club’s Pentangular Partners, the Rotary Club of Leuven - celebrates “Friendship, Strength & Energy”. Commenting on his work, Margaret stated: "It was incredible to see the amount of work that Lewis put in behind the scenes to check we are financially sound," adding, with a smile, "I know too that various banks have been his second home while he's been treasurer".

Last but not least, PP Martin Ward got up to talk about the Mini Group Study Exchange (MGSE), a scheme in which we select two lucky participants to take part in a cultural exchange programme with our partner Pentangular clubs in France (St Quentin), Belgium (Leuven), Germany (Lüdenscheid) and Holland (Leiden). In the audience we had our two 'ambassadors' from last year's MGSE (which we hosted here in Canterbury) and the two 'ambassadors' that will be representing us at this year's exchange in Leiden next week.

Martin presented a quick photographic résumé of last year's programme, including trips to Shepherd Neame Brewery, Wilkinson's Sails, Alan Staley Boat Builders, Canterbury Cathedral, Kent Police HQ, BBC South East, a fruit farm and a day trip to London. Various meals were enjoyed along the way, including one hosted by Rtn Robert Boyd Howell and his late wife Sheila at their farm in Lenham. The visiting youngsters got to experience a bit of Kentish Bat & Trap too one evening! Rtn Brian Dobinson took the stand to tell us how he was given the challenge at short notice to organise the 'vocational' part of the exchange - when the youngsters get to meet someone with a career linked in some way to the youngster's ambition. For instance, a would-be designer got to meet a textile designer that worked on William Morris designs. Although the youngster had different ambitions, the design-loving pair found they had a shared admiration of William Morris.

Thanks to the power of social media, last year's MGSE participants, Andrea Blades and Owen Shore, are still in contact with youngsters from the other countries that they met during their MGSE week. Andrea has since started her anthropology course at UCL in London, which she is enjoying very much. After working locally for a while, Owen will be starting his course in film production at Canterbury Christ Church University (CCCU) later this year.

This year's MGSE pair are Katie Bly, a student from CCCU who has just been awarded a 1st in Religion, Philosophy & Ethics and who hopes to soon be doing a Master's degree, and Miroslava (Mirka) Karaskova who is originally from Slovakia and has an ambition to make history documentaries. Mirka is also at CCCU, currently studying Film, TV & Radio in combination with History. Both youngsters are looking forward to their week in Holland and are excited about the programme of events - in particular, visiting the Hague, seeing unusual Dutch houses, and getting to know about other cultures and customs. Talking about the pair, Martin said "These two really deserve their places"; on behalf of us all he wished them a wonderful week. We look forward to hearing about, and reporting on, their trip in a future post.