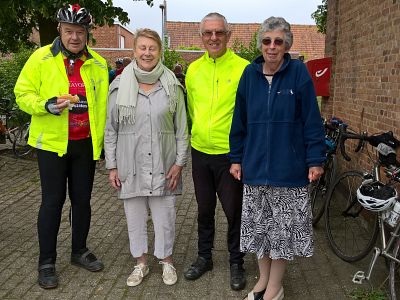 Part of a series of articles about our Members, helping you to know more about the things that we do when we're not doing Rotary activities! Here, a Member talks about his hobby of cycling.

In my teenage years, I was always keen to play sports and take on physical challenges - these included football, cricket, running, hillwalking, swimming and canoeing. I also used to cycle quite a lot as it gave me independence to explore the countryside. Later on I focussed on squash and running as a means of keeping fit. In my forties, I found that both of these activities were taking their toll on my joints, so I gave them up. It was then that a small group of work colleagues decided to take up cycling and I found that this was much kinder to an ageing body. Gradually, we managed to build up our fitness to ride longer distances and participate in charity fundraising rides, such as the annual London to Brighton Ride for the British Heart Foundation and the Lady Mayoress’s Charity rides.

I've cycled extensively in the UK and across Europe, both as part of a group and solo. So far, I have cycled in the Netherlands, Belgium, France, Switzerland, Italy, Germany, Luxembourg, Austria and Slovakia.  I'd say my greatest achievement was cycling from Canterbury to Rome in 2007. I was part of a large group raising money for the Canterbury Cathedral Restoration Fund. We cycled a total of 1200 miles in 15 days, including crossing the Alps. It was an amazing experience, as we were all just ordinary men and women, mostly middle aged, not super fit athletes. I shall never forget arriving in St Peter’s Square in the Vatican in over 40 degree heat. As a group, we raised a total of £130,000 for the fund.

A few years later, I was part of a similar group, raising money for the same charity, on a ride from London to Paris.

Since I retired 10 years ago, I have tried to establish a good balance of active leisure time, community volunteering and foreign travel. In 2018 I joined a few Rotarians and others to take part in the annual Lady Mayoress's Charity Ride, in aid of local charities Porchlight and the Pilgrims Hospice, from Calais to Brussels (via Bruges and Antwerp) - a total of 180 miles.

More recently I've contented myself with gentler challenges and have limited my activities to golf, walking and cycling. During the past few summers I've explored cycling routes along some of Europe’s great rivers, including the Rhine, the Danube and the Mosel. The joy of these rides is less to do with the physical challenge and more to do with enjoying the wonderful scenery and historic sites. I generally ride during the morning and then meet up with my wife for lunch and site seeing in the afternoon.

I was planning another major river this summer, probably the Loire, to revisit the chateaux. But this will need to wait for another year. In the meantime, now that we're locked down, I've established a new daily routine to try and keep fit. I start the day with stretching exercises, followed by house or garden work, then a daily walk or bike ride. It's not all activity though - I also do my fair share of cooking, and am taking a course in basic Italian; I also enjoy, and waste too much time, doing the Guardian's sudoku and crosswords! I must admit that it's been frustrating that, having passed my 70th birthday just a few weeks ago, I find that I am suddenly in the “old and vulnerable” category and find it strange that I'm no longer allowed to participate in some of the volunteering work I have enjoyed for the past 10 years.