Our Members' hobbies - trips to Denmark 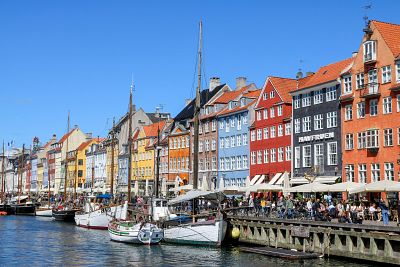 Part of a series of articles about our Members, helping you to know more about the things that we do or think about when we're not doing Rotary activities! Here, a Member looks back on her past and her childhood trips to and from Denmark.

How many parents nowadays would put their 15-year-old daughter on a ferry to Ostend alone and let her find her own way to Rotterdam? I'm not sure - but that’s what my parents did!

My father was in the Merchant Navy, and his company, Brocklebanks, dealt largely with India, Bangladesh and Sri Lanka. His work meant he was away usually for long periods of time - often 4-5 months.

On one occasion my father’s ship was to sail to India; however, it was going to be loading in Rotterdam after leaving London. Although my mother was allowed to travel on the ship, children were not. So, in order to have a few more days together with my father before his trip to India, off I went to Rotterdam on my own. I probably was a bit nervous about not being met at the other end, but I don’t remember being particularly concerned. My parents were not fussers – it was just expected that I would be ok!

The train from Ostend was quite easy. I think I had to change at Antwerp for the train to the Netherlands. But this was where things went wrong. Not speaking any Flemish or Dutch, I couldn’t really understand the signs. I got on a train which seemed to be going in the right direction. We went along for a bit, stopping frequently, until we got to a station – not Rotterdam - where everyone, to my consternation, got off. I sat there - still hopeful that the train would move on - until an official came along and explained that that was as far as that train was going! Fortunately, he redirected me to the correct train and, thankfully, I arrived in Rotterdam safely, to be met by the Shipping Agent who installed me in a hotel until my parents arrived.

I travelled back to the UK with my mother - by train to Ostend, then taking the ferry to Dover. It was around August, and the journey was memorable due to it being on one of the hottest days of the year; so hot that I recall the print pattern from my mother’s dress transferred itself to the plastic seat covers!

That was not my only trip to Denmark. When I was 17, just leaving school after "A" levels, my father was heading off once again to India. This time, my mother was to go with him, so what was I to do? A friend with an au pair job in Denmark wrote to say she had met another family who wanted help so, again, off I went! Dropped off this time at Liverpool Street Station, I got the train to Harwich, and then went onto to the overnight ferry to Esbjerg.

I recall the train through to Copenhagen in particular was great fun. Denmark is in three parts, separated by the Lille Baelt and the Store Baelt (these two strips of water surround the island of Fyn), so the whole train actually had to go on ferries for both stretches – we didn’t change trains between Esbjerg and Copenhagen! I remember going out on deck, and having coffee in the little restaurant there. I think now there are bridges or tunnels, but sitting inside a ship travelling across the water was much more interesting for a teenager.

Once in Copenhagen I had to take a little local train in order to visit my friend. This was known to my Danish family as "Grisen" – the pig - as it was "slow, dirty and smelIy". I, on the other hand, loved it!

My time in Denmark was very much a transition time between school and the outside world. The family I was staying with had teenage daughters – one older than me, one around the same age, and one younger – and we all got on very well. I spoke English with the family, but by the end of my stay I could certainly understand their conversations, and even join in a little. My job was to help the mother who'd recently gone back to work; basically, I was doing cleaning and related chores. In my spare time I'd go out with the elder daughter’s friends, and join in family gatherings. The food was good – the open sandwiches, amazing cakes, the Danish pastries (known to the Danes as Viennese bread) and excellent coffee – after boarding school it was paradise. I had my 18th birthday out there, and also experienced a Danish Christmas. I still have some of the presents I was given.

My friend's "family" lived nearby and I'd go over there once a week. Funnily enough I'm still in touch with them - but through the younger daughter - then 11 and seemingly so much younger. Now, of course, the age gap isn't noticeable!

On our days off Liz (my friend) and I did a lot of sightseeing together in Copenhagen; we went to Danish language classes, and even went over to Sweden for the day once. I also visited Sweden with "my" family, the main attraction for them being the duty free coffee and cigarettes you could buy on the ferry!

I met my first boyfriend while staying in Denmark, through the English church. But when I left the country I felt ready to start life in London - I'd had a wonderful four months in Copenhagen, making lifelong friends. As such, the journey back, in late December, in the dark, felt quite sad in comparison to the excitement of the journey out.