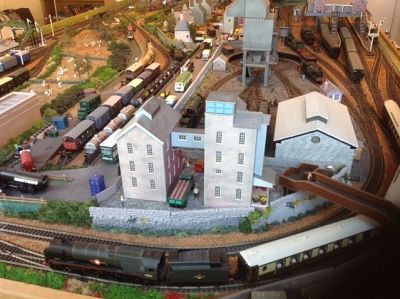 Part of a series of articles about our Members, helping you to know more about our hobbies and pastimes when we're not doing Rotary activities! Here, a Member talks about his past interest in model railways.

As a young boy I was fascinated by the Hornby Dublo model railway layout which my father set up. When I became a father myself I purchased a model train set for my son - but at that time it never took off as a serious hobby.

I have always been interested in railways. My prep school was in Weybridge and this involved a train journey from my home town to there - so I became an avid train spotter as the main lines to Portsmouth, Southampton and to the South west all passed through Weybridge.

When I retired nearly 16 years ago I decided I would have a model railway, so I had my loft converted into a large room and the builders kindly constructed a large table free of charge to accommodate the railway.

I decided at the very beginning that the gauge would be OO, and that it would be based on the period 1945 to 1967 (i.e. the last 22 years of steam) and would feature Southern Railway/Southern Region trains. At the same time I also decided that the basis of operation would be digital rather than analogue. Two benefits of digital are that the electric wiring is much easier and, more importantly, one can run more than one engine independently on the same track.

In designing the layout I wanted to feature both a town and industrial scene as well as a country and farming scene. I constructed a canal roughly down the middle of the layout with town on one side and country on the other.

I have 16 model steam engines and one diesel shunter; all these engines were operating at times during the 1945/1967 period. One class of engine which was introduced by the Southern Railway was known as the schools class. One of these engines was named after my old school (KCS Wimbledon) and one after my son's old school (St Lawrence at Ramsgate). These engines are included in my layout. The carriages are also relevant to the period.

Much of the rolling stock of vans and trucks have a local connection - e.g. local coal merchants often had their names on the side of trucks. Other aspects of the railway are relevant to my past. When I left school I joined Unigate as a management trainee and Unigate owned a number of companies including United Dairies and Cow & Gate. Therefore, the layout includes a milk processing plant and United Dairies milk wagons!

All the houses, shops and other buildings on the layout are typical of the period - as are the stations. My daughter-in-law likes building models and she very kindly constructed a number of the houses and shops from kits.

I purchased a number of model cars, lorries, vans and buses which were on the roads during the relevant period.  The scenery which I added to the layout was made up using a number of different materials.

A model railway layout is never finished; mine is no exception as I still have a number of tasks to complete. I would like to extend the layout to include a main line terminus station. Unfortunately, I have not yet succeeded in getting planning approval from my "chief executive" to  have an enlargement to the table!

A model railway is a very satisfying hobby and it comes very much into its own in the winter - I strongly recommend it to anyone thinking of taking it up.

With thanks to Rotarian Robert for this article. (c) Robert 2020.

Find out more about local Model Railway clubs and get lots of other information about model railways here.

Here you can see a youtube channel dedicated to building budget model railways - some great tips if you are just starting off.