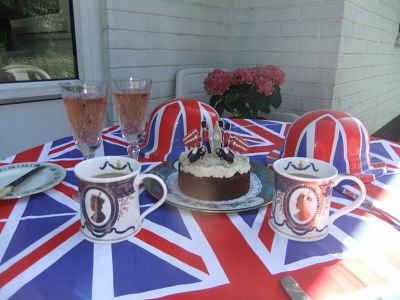 Part of a series of articles about our Members, helping you to know more about the things that we do or think about when we're not doing Rotary activities! Here, a Member looks back on his childhood and his own memory of VE day.

On the 8th May we celebrated the 75th Anniversary of VE Day (Victory in Europe Day, which marked the end of World War II in Europe). The Covid-19 crisis meant, of course, that commemorative events were a little different to how they may have been planned, and many people found themselves reflecting on the day and marking it with their own home celebration.

Past President Harry Cragg was nearly 7 years old on VE Day - but thinking back to his childhood as he sat at home during the lockdown, he remembers very well hearing the news that the War in Europe had ended.

Both of Harry's parents were officers with the Boys’ Brigade and it so happened that they were leading a week-long Camp for the boys (around 20 of them, all aged from 11 to 18 years) at Eskdale Green in the Lake District at the time. Such camping trips took place annually and his parents assisted every year – Harry was even taken along to one when he was a babe in arms! So, although he didn't qualify as a member of the Boys’ Brigade back then, Harry was allowed to take his own small tent and to pitch it alongside theirs. Even though he was a lot younger than the actual Boys’ Brigade members, Harry recalls playing a lot of games and going walking. He also remembers swimming in the river.

The camp site was in a very remote part of Cumberland (Cumbria) with no obvious communications, not even radio; it was accessible via a little narrow gauge railway leading up from Ravenglass to Eskdale (the line being know locally as La’al Ratty). The site falls near Scawfell, England’s highest mountain, and is a popular destination for tourists and climbers nowadays.

Harry recalls that early in the morning on the 8th May, with the first La’al Ratty steam train of the day, people from the community at home came up to tell all the campers that the War had ended. The news caused great rejoicing and necessitated the building of an enormous bonfire to be lit that evening. Moreover, the visitors had brought fireworks with them - which they'd been saving for just such an occasion. Harry doesn't recall what they ate to celebrate - possibly baked potatoes and soup - but the fact that rationing was still in place meant sweets, or toasted marshmallows, were probably not on the cards. Being quite young, Harry didn't participate much with the older boys and on normal days he would have had to go to bed at about 8 o’clock - but he does remember being allowed to stay up for the bonfire/fireworks on this SPECIAL Day!

All in all the celebrations were truly impressive and the happy memory of them lives on for Harry 75 years later.

Picture: There were no fireworks this year for the 75th anniversary – but a patriotic afternoon tea in the "lockdown" garden for Harry and his wife Sheila at their home. Picture credit: Sheila Cragg/Rotary Club of Canterbury.