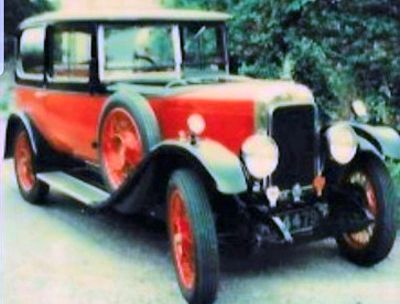 Part of a series of articles about our Members, helping you to know more about the things that we think about when we're not doing Rotary activities! Here, a Member talks about his past interest in vintage cars.

I suppose the origin of my fascination with vintage motor cars (which, for those from my era, means cars made between 1918 and 1932) might be traced to the very first days of World War II, when my father’s motor business premises in Gravesend were requisitioned. According to him, he was given 24 hours to vacate and much of his stock, sadly, had to go for scrap. My father transported remaining equipment and stock in his old Riley to Coventry, to a hastily assembled corrugated iron shed in the back yard of the little terraced house he rented for the family.

My father got a job running transport for the Fleet Air Arm (carrying spares from its depot in Coventry to ports around the country). However, he had debts to pay so extra income was essential. At that time, effective oil filtering systems for cars did not exist. Most engines needed a rebuild every 20,000 - 30,000 miles, with new white metal bearings for the crankshaft needing to be cast and machined in situ.

Due to the war effort, of course, there was no petrol for private motoring. But while no new vehicles were being produced for civilian use, there was a demand from businesses. Pop soon made a forge and boring machinery - which he installed in the shed with his unuseable Riley. He and a friend would then spend their evenings (and much of the night) producing bearings. I recall clouds of smoke from the four big funnels which poked through the roof.

Activities in the shed attracted the attention of the foreman of a large repair workshop called Norman. (Norman, a colourful Brummie, had had an interesting life himself. At one time, like many others from Birmingham and the Black Country, he'd been one of Oswald Moseley’s “Blackshirts” - he'd even attended a Hitler rally in Berlin. Despite finding Hitler a "mesmerising" speaker, however, he was sickened by Fascism and severed his connection with Moseley before the war started.)

Norman, my father and his friend developed a loose association and, once the war was over, formed a company specialising in reconditioning and remachining all manner of engines and their components. New cars were simply unobtainable for most people, and Pop and Norman took a dim view of most cars built in the 1930s, so they looked back to the better makes of the 1920s. Each bought a big old four-seater tourer with huge a flapping “cape cart" hood. Norman bought a 1924-ish Darraq (moving later to a Bentley). Pop bought a 1925 Lagonda with a fierce looking “V” windscreen and huge radiator - it turned out to be the first of a number of Lagondas. This, I suppose, must be how I caught the bug. (Incidentally, the company set up by my father and his friends at the end of the war is still trading and specialises in the engines of vintage and other old cars.)

What exactly was the attraction? Well, vintage cars, especially the earlier ones, were magnificent beasts. Many were beautifully made, with lots of brass and alloy castings, fitted with high quality instruments and minor controls. They had big wire wheels with narrow, high pressure tyres and accurate, high geared, unassisted, steering. The chassis was made separately from the body, which was generally made of light alloy (this meant that you could choose from a full blown saloon car to a sporty two-seater on the same basic underpinnings). The whole vehicle, except for the more funereal saloons, was light - most of the cars had very low rolling resistance so that on the flat they could easily be pushed by one man. These features, especially in the case of the better makes, gave the vehicle a very "lively" feeling and made it truly exhilarating to drive.

The cars were very different to cars we have these days. Generally, the engine and the appropriately-named (and unpredictable) “crash” gearbox were separate. Gear and handbrake levers were at the driver’s right hand. With all these levers, many coach (car) builders gave up on providing a driver’s door, meaning drivers reached the driving seat by jumping over the side of the car! Quite a few of the cars, including the excellent Alvis (which came to be one of my favoured makes), used gravity to feed petrol to the engine from a large tank in front of the instrument panel, necessitating a very inaccessible tap alongside the foot pedals. In circumstances requiring the greatest intimacy, three could be accommodated abreast in the front - but it was as well to give female passengers a good deal of prior explanation when turning the petrol tap on and off.

Although the cars were demanding, they were great fun. My own "hobby" was to find an elderly “invalid” car - perhaps hidden behind a barn or in some derelict suburban garage - and spend several hours in the cold and wet discussing all sorts of irrelevant topics with its keeper. Then, sometimes, I'd exchange a few pounds for the logbook, tow the car home, refurbish it and then use it.

I never rebuilt a car completely, and never did I fail to get home under my own power. However, there were occasional puzzling pauses in my hobby.

I bought my own first vintage car in the 1950s  - a lovely 1927 12/50 Alvis “Sportsman“ saloon which had had only one owner, a then retired professor of music. He wanted a new Morris Minor as his wife’s rheumatism prevented her climbing into the Alvis, so his son-in-law agreed to "take it off his hands". It so happened that this son-in-law lived in Leamington Spa, where (at the time) I was an articled clerk. He didn't want the Alvis - he coveted a Straight 8 Horch (symbolized by one of the four rings on the front of an Audi), which had originally been given by the Italians to Emperor Haile Selassie. (Selassie had brought the car to this country when he was chased out of Ethiopia.) Hailie Selassie, and had been brought by him to Leamington when they chased him out of Ethiopia. The Horch was for sale, but the son-in-law was a little short of readies to buy it, having helped his old boy out with his Morris Minor. So, there was a deal, and for £47/10/- the Alvis was mine, and the Horch his!

The Alvis was quite a stunner, especially after I'd resprayed it red and black (using black and bright red paints I literally found at the back of my father’s garage) - see picture. It had two doors with railway carriage-type loop handles, an oval rear window, original leather upholstery and roller blinds to each window. It even had two silver-topped vinaigrette bottles in their own little holder!

That Alvis served me every day for around four years; it never let me down, and "introduced" me to a lot of interesting people and other vintage cars. But eventually the time came when I wanted to get married. There was no way that Carole, my wife-to-be, was going to master its gearbox, so its place was taken by a post-war Alvis, painted pedestal pink and grey. This car, however, was as dull and heavy as the 12/50 was light and engaging (perhaps a metaphor for the decline of the British motor industry?)

Anyway, some time later another Lagonda came my way - in the form of a very rakish 1927 sports tourer, which I repainted in a fetching British Racing Green.

For most vintage cars, as for this one, the brakes were the "Achilles heel". Few 1920s cars had hydraulic brakes; instead, they relied on complicated braking systems involving rods and cables. These were hard to adjust and often resulted in one wheel locking before all the others - meaning the direction of travel under heavy braking could become distressingly unpredictable! Lagonda sought to overcome this by installing a special gearbox under the driver’s seat, into which all the rods and cables were fed; the intention being that, by some mysterious process, the braking of the two front and two back wheels was equalised.

There came a time when Carole went for a wedding dress fitting. I went to collect her in the Lag. As we crossed a very busy square in the centre of Coventry the car suddenly screeched to a halt, with all four wheels locked; I hadn't touched the brakes - it was just as though a giant hand had grabbed us out of the sky! After a few moments , I realised that one of the back road springs had fractured, allowing the axle to drop back on one side, and causing the ingenious gearbox to work in the opposite way to what was intended. Luckily, in those days I never went out without some rope, a jack and some bits of timber. With those, and an odd house brick I found in the gutter, I was able to reposition the axle and drive myself and Carole home. I’m not sure what portent Achilles would have seen in this incident!

Nothing else pleased me quite like the old 12/50, and after a year or two I found another one - this time a 1926 two-seater with a dickey, which I drove on and off for many years, entertaining a good many children on the way. My original 12/50 saloon was owned by a friend of mine for over 50 years and, to the best of my knowledge, is still hale and hearty.

In the later 1980’s I was invited to a reunion of former Round Tablers in Béthune in France. I decided to drive there - with a friend - in the Alvis. At the time, the old car hadn't been on the road for about five years, but it went faultlessly. However, as we drove along the A2 in Kent in very heavy lorry traffic, it poured with rain - leading me to the reluctant conclusion that such old vehicles were just not up to providing sufficient protection when things went wrong (as they do). Having no interest in trailering it to rallies etc, I decided that the best thing was to sell it. Funnily enough, when I offered it for sale I got twice the price I'd asked for - and the proceeds financed my next hobby (sailing) ... but that’s another story.

Click here to learn about the Alvis Register - a "Club for the Vintage Alvis Enthusiast", which has a nice collection of photos.

You can also read more about Alvis heritage from the Alvis car company here.