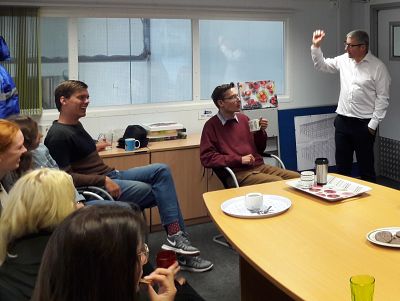 Before they left our Mini Group Study Exchange (MGSE) delegates had another interesting trip that gives them a flavour of Kent - this time to Oakdene Farm in Sutton Valence, one of the largest soft fruit enterprises in the South of England.

The Chambers family have been involved with growing fruit for several generations, with the current business, that has its head office at Oakdene Farm near Maidstone in Kent, being established in 1952. Their business focus is the production of soft fruits and cherries - both of which are suited to growing in Kent's chalky soil. They are also leading players in the supply of other fruit such as blackcurrants, redcurrants, gooseberries, strawberries, blueberries and rhubarb. The farm's current managing director is Tim Chambers, the third generation owner who took over the business in 1990.

Joined by Mr and Mrs John Chambers, the MGSE youngsters heard about the farm and its business from Mr Tony Godden, W B Chambers Ltd's Finance Director, in the Farm's conference centre. His figures alone gave the students a sense of the scale of the business. During his talk they heard how the business - which supplies around 17% of the total supermarket raspberry consumption in the UK - is run. Clients include leading supermarkets such as Asda, Sainsbury's, Tesco, Aldi, Morrisons, Lidl, the Co-Op and M&S. The farm has around 500 full time staff, with the number of staff increasing to around 1,500 at peak times each year with seasonal workers. Over 1000 tonnes of raspberries - including varieties such as Bella and Charm, developed by Chambers' own breeding programme - are grown. Turnover for the business is around £100 million.

After the talk the students got a chance to look around the new factory where Fruit Pots will be manufactured. British weather lived up to its reputation, with rain meaning the youngsters did not get to see the entire farm. Nevertheless the students did get to see one of the "polytunnels" where the fruit is grown and heard about the very high tech growing methods that the Chambers family use.

We are immensely grateful to all the staff and of course the Chambers family for welcoming our MGSE 'ambassadors' and showing them around their facilities.

Big thanks also to all the other organisations and individuals that have helped with this MGSE week. We really appreciate your help!