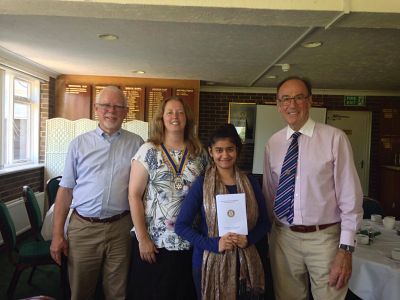 We are delighted to announce the selection of our two ambassadors for this year’s Mini Group Study Exchange (MGSE) in Lüdenscheid: Charlotte Wilks and Tamanna Miah.

Both have attended or are attending Canterbury Christ Church University. Charlotte (23) has just completed a BSc in forensic investigation combined with criminology, where she obtained a First. Tamanna (24) will graduate next January with a BA in Media and Communications and Politics and Governance. In October, Charlotte will be starting a Masters in Forensic Anthropology and Archaeology at the Joint Services Command and Staff College at Shrivenham, near Swindon. Tamanna is interested in the Arts (drama, dance, singing, music, art, design, theatre, cinema), food, politics, media, current affairs, volunteering, writing, blogging, campaigning, refugees and migrants.

Tamanna and Charlotte were selected as two very worthy candidates from the initial six applicants.  The interview panel - made up of then President Martin, President-Elect Sharon, Vice-President Margaret and Pentangular Officer Alastair Scott - met in June. The application process and interview was held using Fair Selection techniques. All the candidates were interviewed and the panel was unanimous in its choice of Charlotte and Tamanna, both of whom were described as outstanding candidates.

Both young women are looking forward to their week in Lüdenscheid, between 27 August and 3 September, where they will participate in a variety of social, vocational and sporting activities with representatives from our other Pentangular partner clubs.

Hosting the MGSE falls to the club which hosted the Pentangular the previous year.  That means it will be Canterbury’s turn to entertain two ambassadors from each of our Pentangular partner clubs - as well as selecting two young people from Canterbury - next summer.  Watch this space for more information!

Photo: Tamanna (in blue) with Past President Martin, President Sharon and Pentangular Officer Alastair Scott. (Unfortunately Charlotte couldn't be there for the photo.)