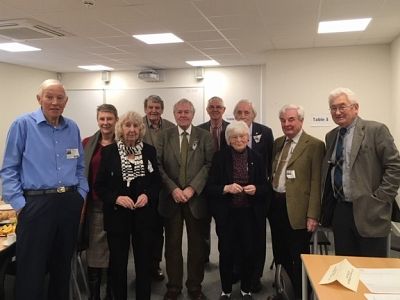 Yet again our members were out helping local schools with mock interviews that will help prepare the youngsters for their future studies and careers. It's a great way for us to support schools in their endeavours.

The other day no less than ten members of our club went along to Spires Academy to conduct interviews with their year 11 students, all aged sixteen.

The main purpose of the initiative is to give the students, most of whom have never attended an interview, an idea of what to expect and to help them prepare for "the real thing".

Each Rotarian conducted five interviews, with each interview lasting about 20 minutes. The Rotarians had 10 pre-set questions from the school, ranging from querying the youngsters about their computer literacy to asking them about the person that has most influenced them in their life. The Rotarians then asked some of their own questions and finally gave the students some feedback, which hopefully will help them strengthen their interview skills. Written comments were also relayed to each student after the event.

The event was part of our continuing initiative to help and encourage schools in the Canterbury area; each Rotarian considered it a very worthwhile personal experience. As our President Elect, Alan Mepstead says, "We hope that all the students do well in the future.

With thanks to Alan Mepstead for providing a draft.