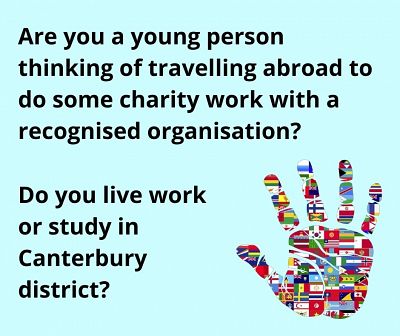 Are you a young person thinking of travelling abroad to do some charity work with a recognised organisation? Do you live work or study in Canterbury district? Read about our Millennium Trust Scholarship Fund grants....

Our Club established a charity at the Millennium to provide grants to young people who live, work or study in the Canterbury district and who have an interest in undertaking some charity work abroad with a recognised charity.

Since its inception the charity has attracted a good level of applications for grants but requests ceased with the worldwide spread of Covid-19 and sadly a number of grants were returned when expeditions were cancelled as a result of the restrictions imposed.

International travel restrictions that were previously in force have been changed and people are cautiously travelling further afield; this may encourage young people from our district to consider some overseas charitable work. There are many benefits from the experiences and adventures gained from undertaking such challenges including the enhancement of educational courses for those studying environmental topics.

To date, we have helped around 60 youngsters who have shared nearly £30,000 between them. This year, we expect to award a total of £2,600, which may be allocated to one applicant, or may be divided between a number of deserving candidates.

Among the recent successful candidates who have come back to talk to the Club about their time abroad are:

All these young people have had life-changing experiences being able to help others, as well as greatly broaden their own outlook on life. Often they have had to endure what was to them, primitive conditions. All of them have benefited from, and enjoyed their time, abroad.

The Charity Trustees are now looking at providing grants from 2022 onwards.

Application forms can be downloaded from here.