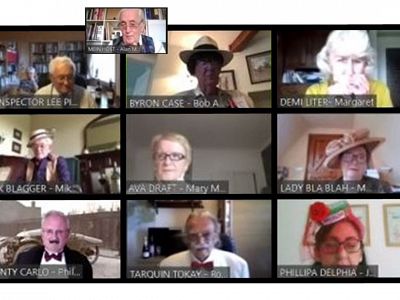 Allo Allo Allo. Murder & intrigue were all on the cards during our guest evening by Zoom the other night.

The setting was a beautiful vineyard in France where a crime most horrible had been discovered: vineyard owner Max Liter had been found drowned in one of his own vats! Under suspicion were a number of dubious characters who had gathered at Max’s home. Inspector Lee Piador, we suspect from the “Not-So-Sûreté” police force, had been given carte blanche to lead the investigation.

First on the set was Inspector Le Piador himself, played by Peter. He was an impressive man able to do many impressions and wear many hats which, in fact, he literally did. The inspector switched nimbly from British bobby-on-the beat to a Germanic officer….all at the "drop of a hat" and accompanied by suitable music. In the background we could see his police side-kick Brenda hard at work.

Byron Case was next on set. Byron was an affable chap that got on well with all in the room. He seemed a bit of a bon viveur and had a remarkable knowledge of fine wines. Bob, who played Byron, took to this aspect of Byron’s character like a duck to water, pouring out a glass or two during the evening. A remarkable head of plush, thick, dark hair under his hat was a testament to the benefits of un peu de vin for hair growth; Byron may suggest that all follically-challenged Rotarians give this a try.

Next was Demi, Max’s widow, played by Margaret. A perfect hostess, prim and pristine (some might say almost headmistress-sy), Demi was distressed immensely by the loss of her dear Max - frequently bursting into tears during the play. So distraught was she that she lost the plot a couple of times – quite literally! Thankfully, others were able to predict what she might be wanting to say so all went smoothly.

Nick Blagger (played by Mike) joined the set next. Yes, the self-professed great man himself! ("Who?" - you might ask!) Dressed in a casual boater hat and waitstcoat that was en vogue in the era of the play (which seemed to be somewhat vague, sometime between the 1930s and the 1970s if costumes and dialogue were anything to go by). It seems Nick was once a pop star, and having watched Eurovision a couple of nights before, the man couldn’t help dropping into song at every opportunity. (However, the audience didn't seem to be his biggest fans and we suspect he would have received nul points. What’s new, eh?!)

Ava Draft – a Swiss banker – joined us next. Her accent was remarkable, supposedly Swiss with a hint of Austrian via Scotland. Quite a terse lady who wouldn’t suffer fools gladly and certainly didn’t like to be interrupted, Ava was played by Mary without a "single" stereotype or cliché in sight. (In fact, there were several.)

Lady Bla Bla (Maxine) was definitely most British in manner although her accent had the hint of a bit of French with numerous dropped “h’s”. She reminded us of Hyacinth Bucket (Bouquet) although the character did give us the impression of not really caring what people thought of her. She wore a hat most magnifique that suited a posh gathering.

Monty Carlo, played by Philip, arrived on set from his fabulous chateau in a rather large classic voiture, which he did go on about a bit. Dressed in a smart dinner jacket and dickie-bow, he had a remarkable moustache which some of the audience cruelly suspected was a Zoom filter.

Ex-Foreign Office member Tarquin Tokay was played by Robert. Also sporting a moustache, and wearing a pristine white dinner jacket, Tarquin turned out to be a bit of a pompous old boy - of the sort one often comes across in detective stories. Despite hints about spies he was perhaps less MI5 and more MI-four-and-a-half. The man was determined always to be right and his snooty attitude came across well.

The final guest at the gathering was Phillipa Delphia (Phila Delphia for short) who wore a rather "cheesy" outfit with a pillbox hat that looked remarkably like a tub of well-known soft cheese with a veil that looked like some netting from a bag of oranges. Pretending to smoke a filter cigarette (that reminded one of a chopstick), she positively gushed at everything anyone said with a strange air of naïveté and a soupçon of innocence.

The host for our soirée was the débonnaire Alan Mepstead, Club President, whose knowledge of foreign languages was impressive and certainement far better than Amanda Holden’s at Eurovision.

All the players acted out their roles and asked questions of each other avec aplomb – although we'd rather not share these details here so as not to spoil things for others that do the play. Suffice to say that there was lots of intrigue, talk of beacoup de liaisons and play acting before the inspector reviewed le evidence and decided who the killer was/killers were with a final “et voilà”. There was a prompt arrest of the guilty party/ies in question, with protestations of innocence until la fin and a round of applaudissements from the audience.

We have since learnt that there will be an appeal due to the emergence of a valid defence for the arrested party. In the interim, there will be a socially-distanced group of Rotarians protesting the inspector’s findings. Let’s hope justice est rendue and Max can repose en paix up there in the vineyard in the sky.