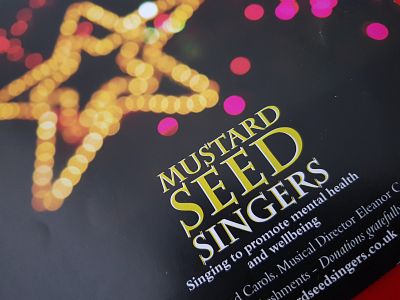 Several members of our Club enjoyed a Festive Concert held by the Mustard Seed Singers in Canterbury last Friday, when they were treated to a range of both both traditional and modern Christmas carols and songs.

It was a joyful occasion and included some audience participation, readings and a moving violin solo of 'The Snowman' by nine year old Victor Caldon. Around 17 of our members attended the event, which was held at St Peter's Methodist Church in Canterbury.

The Mustard Seed Singers choir, led by Elle Caldon, is a charity designed primarily for people affected by mental health issues and others who feel their wellbeing would be improved by singing. Our Club has been supporting them for over ten years and it's been exciting to see their considerable progress over that time.

With thanks to PP John Hill for details of the event.