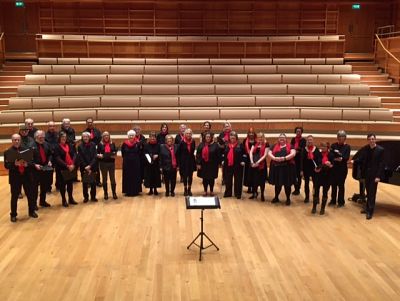 A group of 15 Rotarians/wives went to the Colyer-Ferguson Hall at the University of Kent yesterday to listen, and take part in, a Festive Concert put on by the Mustard Seed Singers.

Mustard Seed is a local charity which has two choirs, one based in Whitstable and the other in Canterbury. The choirs are for people with mental health problems and those affected by it e.g. carers, relatives and friends.

After the musical performances (which included festive songs and traditional carols) there was a drinks reception as part of Disability Awareness Month. The Musical Director for the evening was Elle Caldon. Although the event was free entry, donations were warmly accepted.

Recent research has shown that there are many psychosocial benefits from being part of a choir. We as a Club have supported the Mustard Seed choirs a number of times and will do so in the future.

There is another Festive concert in Whitstable on 15th December at St Mary's Hall, Whitstable Umbrella, 6.30 - 7.30 pm