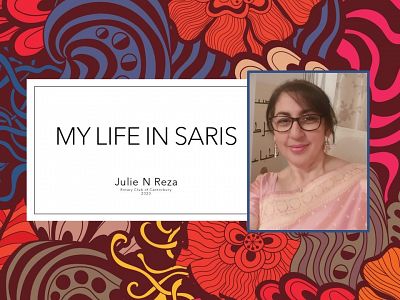 A taste of the East and a bit of colour was introduced into a dark autumnal evening when one of our Members spoke to us about her "life in saris" the other night.

Rotarian Julie Reza is a big fan of saris - the traditional outfit that many ladies from, or with connections with, the Indian subcontinent wear. Although she grew up in the UK, she was born in Bangladesh and has enjoyed wearing saris on many occasions.

Julie (who was wearing a sari during her talk) started with a brief "disclaimer" saying that she was no expert and what she knew of saris had been mainly learnt over many years from sari-wearing friends, relatives and trips to Bangladesh, plus a little bit of searching on the internet!

Julie had divided her talk into two parts. In the first part, she introduced us all to saris, every now and again throwing out questions for us to answer. We learnt that a sari is a draped women's garment made of a long length of unstitched fabric. Taking a guess at how long one is, various Rotarians called out (or mimed) different numbers. We learned that a sari is most commonly around 6-7 yards long. We saw some pictures of ladies wearing saris - from sophisticated ones to more simple and practical ones worn by rural women. We were surprised to learn some prices - although Julie told us they were extremes and didn't really represent most saris. The cheapest she showed us cost the equivalent of £1, while the most expensive, made of silk and embellished with gold and precious stones, including diamonds, cost about £51,000!

Our Members learnt the names of parts of saris, and were shown lots of examples (photos) of sari finishes (e.g. hand painted, embroidered and block or screen printed). We found out that there were, according to the internet, over 100 ways to drape saris - before Julie outlined the 7 simple steps of putting one on. We were told that the most difficult skill (for the way Julie drapes saris), is pleating the saris. Julie also joked about an important “8th step” for those not practiced at wearing saris - safety-pinning things in place!

We discovered that saris, in effect beautiful lengths of fabric, were sometimes used as soft furnishings or to make colourful evening bags. We even found out the link between saris and quilts and learned of a fine quilting technique popular in Bangladesh called "Nakshi Katha".

After a brief summary of the first part of her talk, Julie went on to give personal anecdotes about how saris had enriched, or punctuated, her life. Each anecdote was accompanied by pictures and a description of the sari; in several pictures Julie was wearing the sari in question.

Julie’s story started before she was born, when her parents got married at a time of martial law. We also heard a story about Dhaka (then Dacca) muslin being so fine it could pass through a ring, and were told that some people say that during the Raj the British destroyed the local industry as they wanted to sell products from their own mills. Apparently, there’s even a rumour that weavers' thumbs were cut off!

Julie then went on to talk about wearing saris at different occasions or events over the years. We learnt about "Silsila", "two-tone" and "tissue" saris. Julie told several stories with a loosely Royal theme - including being introduced to the Queen, dressing up as a princess for storytime at the Beaney and "meeting" (or not) actor Brad Pitt at a Royal Film Premiere. Julie's anecdotes touched on floods, riots and snow. We found out a little about the "paisley" motif. There was even a brief, almost topical reference to Trump and the famous "Covfefe" tweet.

Julie told us about the cultural importance of certain saris - and the significance of certain colours. The first day of spring, for instance, is marked in Bangladesh by wearing bright orangey-reddish colours. Language Martyrs’ Day, on the other hand, is marked by wearing black and/or white - the two colours traditionally associated with mourning.

In her final two slides Julie spoke about how saris can promote cultural understanding and how three local Rotarians (herself, new Member Shabana and RCC Sunrise Member Sinitta) had all worn “purple4polio”, to raise awareness about the global effort by Rotary and others to eradicate polio from the world.

After summarising her talk Julie asked if there were questions/comments - and there were plenty, covering Members'/spouses' own sari anecdotes, the number of saris owned by Julie, the places where saris are made and the practicality of saris on motorbikes (!)

Rtn Dee Mepstead thanked Julie on behalf of the Club at the end of the talk.