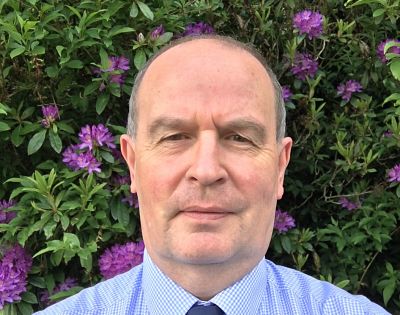 Each new Presidential year brings in change, and in the build up to the annual handover our President Elect, Neil Fraser, gave us some insight into his plans for the year ahead in a presentation to members during our Club Assembly meeting.

Neil is a chartered civil engineer by training, and it's clear that he relishes a challenge and believes that "change can be good". Lately he's been busy consulting others - including our Past Presidents and various members of our Pentangular partner clubs - about what does and doesn't work well in their clubs and what they see as challenges ahead. He's also borne in mind some feedback from some of the students that will take part in our Mini Group Study Exchange  (MGSE) when asked what they knew of Rotary: ‘’It’s not all about weekly meetings is it?, but also having fun’’ and ‘’We all have a nice life, but some people don’t, so we use our business skills to help them’’.

As a result of his consultations, Neil has decided that the theme for the upcoming year is 'change' - and while Neil hopes to set several changes in place, he reminded members that he will be THEIR president, not just THE President, so he will be looking to engage them with the changes.

Before Neil set out his plans, he congratulated outgoing President Margaret Griffin on her Presidency. Much has been achieved during the year - our club has supported great local and national causes, had some fun times, and in-between it all we've even managed to recruit two new members! Margaret's three charities have received our support; the Juba School is progressing very well, and our Pentangular friends have agreed to delay their project to give the Juba project funding for the final year.

Neil has some ambitious plans - to get a Foundation Grant and do some exciting work with that, to increase our membership further, to strengthen our ties with other Rotary Clubs (e.g. through scatter weeks) and also with widows and Inner Wheel, to continue to support the great causes that we back and especially to support the three charities that he's chosen for his Presidential year - Canterbury Samaritans, the Salvation Army, and the Prince of Wales Youth Club. He also set our members some challenges - one being to all be involved in getting speakers on board, so helping to further broaden the range of speakers that present to us.

There are plans for some procedural changes - with Neil viewing Club Council as the 'Captain's Bridge' and the Service Committee as the 'Engine Room'! Neil wants to capitalise on ways in which we communicate - amongst ourselves and to others. He emphasised the importance of respect and upholding Rotary values. Neil also wants us to think about how to get best effect from our Millennium Trust Scholarship Fund (which supports young people going overseas for charitable purposes).

Neil emphasised that it was important that we continue to help and support youngsters and the other causes with which we have longstanding links, such as Shelterbox (who respond to global disasters with the provision of boxes containing items for families to meet their immediate needs following a disaster).

Our finances in the year ahead are looking healthy (Neil thanked our outgoing treasurer, Lewis Norris), but we can't rest on our laurels. There are challenges ahead for which we should plan ... and exciting times too, with our upcoming Centenary in 2022. Horsepower, so to speak, is always a difficulty, and Neil reiterated how we ALL need to contribute to the Club and its activities so that it continues to grow well and help the community.

Neil then handed over to the Chairs of our three main Committees - Mary McGeary (Vocational), Viv Pritchard (International) and David Barton (Community Service).

Rtn Mary's vision for Vocational is that it will continue to be a "doing" Committee, working for instance with young people from all types of schools and encouraging them to go forward in life; continuing to run the Innovation Competition; helping to support the ESU's Public Speaking Competition and working with schools on the Children's Story Writing Competition. She told us the latter was "one of the most joyful expriences [she's] had".

PP Viv will be chairing International for his 2nd year. He stated how the Committee will continue to engage with local charities or individuals that work overseas and could benefit most from our help. Its members will also continue to raise funds following disasters. The success of using microcredit to support entrepreneurs and their families in developing countries through Lendwithcare will continue. As already mentioned, the Juba school will be supported through Pentangular.

PP David told members how his Committee will continue to support people and organizations with a local connection. While new requests continue to come in (many through our website), the Committee will carry on supporting St Nicholas; School, Canterbury Foodbank and the Mustard Seed Singers. A focus for the year ahead will be to support organizations that help those recovering from alcohol and drug addictions. Deborah Connolly, who will assist David as deputy, also spoke about the Committee's support for Honey Bears Nursery that supports young children with learning disabilities.

Finally, Rtn Roger Power spoke about the Millennium Scholarship Trust Fund, which is a separate charity that he chairs, overseen by a board consisting of our members. Thanks to some recent changes the Fund has been re-invigorated and this year 10 grants, equivalent to around £5,000, have been awarded to selected recipents.