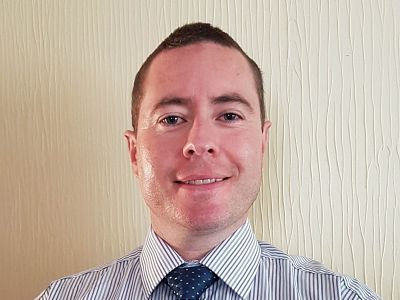 Crispin Rampling was one of two new members inducted at our recent meeting. Here we give a little bit of background about him.

Crispin was born here in Canterbury and has lived in the district his entire life, first in Sturry and until now in Herne Bay.

He has worked in the travel industry - selling both holidays and foreign exchange. Crispin has been employed by the Home Office since 2003; currently he works as an Immigration Officer in Northern France.

Crispin is a graduate in humanities. His studies took him through the subject areas of history (ancient Greek and Roman), philosophy and a foundation in the German language.

In his spare time Crispin plays the drums, a hobby he has engaged in since the age of 12. His other interests are reading, language learning and continuing education.

Crispin is no stranger to community service as he was elected to serve as a councillor on Canterbury City Council in 2003. Serving at the time were Rotarian Rosemary Doyle and Past President Harry Cragg. At the time he was the youngest Councillor ever elected - at the tender age of 22!

Crispin had been looking for a way to better serve his community - but had reservations about doing this on his own. He felt that by joining a long-established and well-regarded organisation such as the Rotary he would learn a great deal and be able to use his skills to benefit others globally as well as within his community. Crispin is well aware that the best way of achieving this is within a team setting.