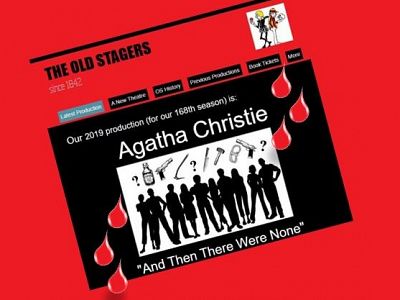 On Friday 9th August about 20 Rotarians and partners set off to see Agatha Christie's "And Then There Were None" performed by the Old Stagers in Canterbury. Fortunately, there were still the same number at the end of the evening...

That can't be said for the play's characters, thanks to a number of murders that took place on the island where the play was set! There was plenty of comedy and suspense to keep the audience entertained during the evening, making it enjoyable for those that attended this classic Agatha Christie thriller. The twist was that the Old Stagers used one of the less well-known versions of the the play.

The Old Stagers are "the oldest surviving amateur dramatic company in the world", having been founded in 1842 by the Hon. Fred Ponsonby (later Earl of Bessborough). They originally performed during Kent's annual Canterbury Cricket Week and have close links with Kent County Cricket Club (as do we, having our regular meetings at the St Lawrence cricket ground). The performance was held at the fantastic, very modern Malthouse Theatre in Canterbury (King's School) and marks their 168th season, and the first at Malthouse.

The main play was followed by a revue (Epilogue) with amusing sketches and music.

Picture: A screen grab of the Old Stagers website with some drops of blood added for dramatic effect! Picture Credit: The Old Stagers/Rotary Club of Canterbury.