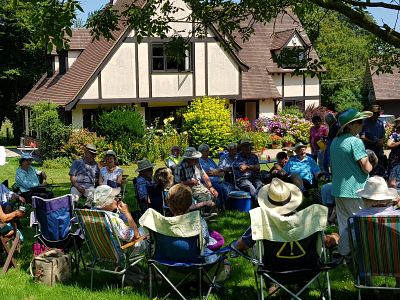 Our first fundraiser of new President Margaret Griffin’s year was held on Sunday – an Open Farm Day that raised over £1000 towards supporting a number of underprivileged students at a school in Juba, South Sudan.

The day started with glorious, sunny weather - so it was lovely to spend it out in the countryside of the North Downs. The event was held at the home and farm of Past President (PP) Robert Boyd Howell and his wife Sheila, in Lenham, Kent. Around 60 Rotarians, their friends and family attended – with people of all ages enjoying the fun.

While visitors made themselves at home on Robert and Sheila’s delightful grounds with picnic tables and chairs, Robert kicked things off with a warm welcome. He gave an introduction to his farm and some health and safety advice before Margaret gave a brief speech. She told everyone about Juba and thanked them for their support by buying tickets for the event and spending money during the day.

Lunch was a freshly cooked (whole) hog roast, prepared by Anthony Round - who offered us a 30% discount for the hog roast. Plates were piled high with slices of roast, a bun, sausages, potatoes and salad. The vegetarians weren’t overlooked, with quiche instead of roast. There was plenty of chat and laughter while everyone tucked into their meal.

Visitors then roamed the farm and visited stalls set up in a huge grain barn (which had only been emptied out the night before). There they found a bric-a-brac stall, a plant stall (with tomato, coriander and spinach plants), a cake stall (with lemon slabs, coffee & walnut cake, Victoria sponges and animal-themed cupcakes), and a stall with the raffles prizes on display. A number of farm vehicles were also on display in the yard, including a crop sprayer and a tractor and trailer. Robert was more than happy to answer questions about how these are used around the farm. There was also a bouncy castle for youngsters to have fun on.

The more energetic visitors set off in the mid afternoon heat on a wildflower and woodland walk – some of the children equipped with scavenger hunt activity sheets to keep them busy. Those unable to walk – or feeling a bit lazy – were taken by Robert around the farm on his buggy. Robert told them about the field lying empty as part of an environmental scheme, the crops (e.g. maize), crop-spraying, harvesting etc. He also took the buggy into the woods – there he talked about coppicing, the historical use of lime to increase the pH of local acidic soil, and deneholes (showing us one that is around 30 metres deep and suspected to have been made in order to find more lime). It was wonderful, too, to look out over the views of the North Downs fields.

At tea time attendees were treated to some strawberries or raspberries and cream – the fruit being kindly donated by family business WB Chambers Ltd of Oakdene Farm, Sutton Valence. John Chambers is one of the leading suppliers of soft fruit to the UK supermarkets. Meanwhile some visitors had fun messing around with various photo props, which added to the merriment. Others had a go at the coconut shy, with some fast-bowler-like action knocking a few nuts off their perches.

Reflecting on the day, Robert said: “The support we had today was superb, and I’m really delighted that everything went so well”. President Margaret was also delighted with the event’s success. “It’s been a wonderful day, and it’s great to know that the funds we’ve raised can support youngsters at the school in Juba in their studies.” [A report on the school will be appearing on our website soon].

Preliminary figures show that over £1000 was raised; the raffle alone contributing £300 and boosted with over £90 from the sale of cakes.

We’re grateful to everyone who supported this event – not just the Rotarians (especially members of the International Committee), but those who worked behind the scenes or donated bric-a-brac and raffle prizes too. We're also grateful to Four Jays, who provided two portaloos at a 50% discount. Everything (weather included) contributed to a lovely day!

More pictures of the event are available on our Facebook page.