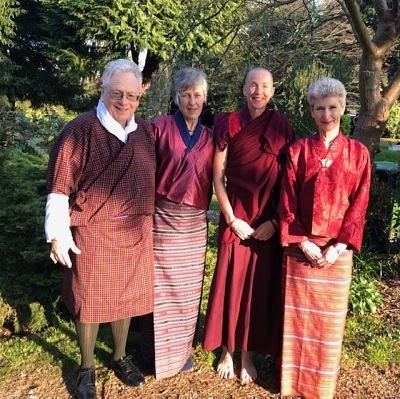 The other Friday PP Richard Kemball-Cook and his wife Cora hosted a reception for Emma Slade’s charity ‘Opening your Heart to Bhutan’ to celebrate and say ‘thank you’ to the many who had contributed to the raising of over £300k for her projects.

Emma has previously spoken to our Club about her work, and Richard travelled to Bhutan and met fellow Rotarians while there in 2017.

Present at the event were some 50 supporters, including members from the Rotary Club of Canterbury Sunrise and of Sandwich.

The £300k funds raised had built extensive facilities for schools for handicapped children, provided hospital equipment, training for the teaching of special needs children, etc. Emma's charity has recently partnered with Save the Children on literacy programmes.

Both Sunrise and Sandwich clubs had had their own fundraising matched by Rotary District Grants and, working with the Rotary Club of Bhutan, were arranging for Rotary Global Grants with their partner clubs across Europe.

Bhutan has imposed dress codes dating from the 17th century in an effort to preserve its heritage, so official costumes were worn: Emma’s two volunteers wore the elegant women’s Kira and Emma wore her usual Bhutanese nun’s robes. Richard was honoured to wear the Gho given to him by recently deceased Canterbury Rotarian Colin McKone, who had been the World Bank official heading development projects in Bhutan in the late 1990s.

If you wish to know more about Opening Your Heart To Bhutan, click here.

Picture: Richard in his Gho, the volunteers in their Kira, and Emma in her nun's robes. Picture credit: Richard Kemball-Cook/The Rotary Club of Canterbury.