Our Bookclub: Our Man in Havana by Graham Greene 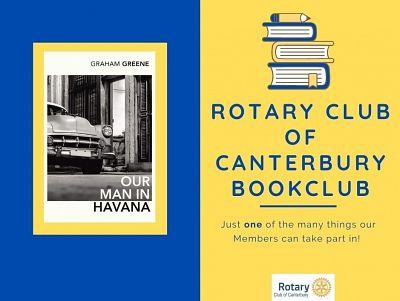 This month's book: Our Man in Havana by Graham Greene

The setting: The book is set in  Havana, Cuba, during the Batista regime

What's it about: Published in 1959 (just months before the Castro revolution), the book takes a light-hearted look at the world of spies. Along the way it touches on more serious issues such as relationships, justice and equality. It was classed as "entertainment" by Greene and pokes fun at the British Secret Service. Everything centres around a character called Womold, a failing vacuum cleaner salesman, who is recruited as an agent and begins inventing contacts and sub-agents; meanwhile, his drawing of the works of an “atomic” vacuum cleaner is accepted as that of a secret weapon.
(The book gave rise to the wonderful and well-known film starring the late Sir Alec Guinness.)

Please note: all comments and opinions are from our bookclub members and are not the views of the Rotary Club of Canterbury, nor are any of the books mentioned endorsed by the Club. Imagery is used under the terms of fair use for review. © Grahan Greene 1958. This edition reissued by Vintage in 2019. Vintage Classics is part of Penguin Random House.