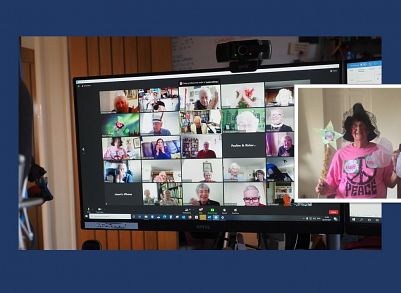 While the eyes of the world might have been on the Golden Globes, the eyes of our theatre-loving Members were glued to their Zoom screens for our “unseasonal“ panto, brought to us LIVE by Hermitage Productions.

Set somewhere in Canterbury, the Panto told the tale of a forlorn young George, doomed to spend his 80th - sorry, 18th - birthday far apart from the love of his life, the beautiful Princess HokeyCokey. What is more, her father has a right royal attitude and wants to alter the streets of Canterbury, while a dangerous Dragon, aided by the wicked Fairy Liquid, are determined to take over Westgate Towers.

But George is eventually able to reach his love and defeat the Dragon with the aid of his late father's trusty sword, shield and helmet (the latter looking remarkably like a Rotary cap) and the support of his good friend, Donkey, plus the Vicar of Dibley. (Yes, we know, where did SHE come from?) Meanwhile, Princess HokeyCokey is grateful for the support of her dear friend, Tinkerbell the fairy, as she voices her wish to find love & romance. The story is ably recounted by the Narrator (though his ability as understudy was called into question when Dragon suddenly vanished from the set, briefly, in a puff of ethernet smoke!)

George, played by Mike Talbot, not only stole the show but put that fearsome dragon in his place - we suspect the Rotary helmet must have given him super powers.

The costume designers clearly had (or perhaps, hadn't) gone out of their way to bring the action to life. Donkey (aka President Alan Mepstead) was wearing a pair of fetching ears so that he didn't look like a totally silly ass; just as well he didn’t have to wear a mask as we’re not sure how he would have done that. Princess HokeyCokey (Dee Mepstead), despite bemoaning a lack of "spare" tiaras, managed not to upset anyone over her tiara choice (as has happened in the past in royal circles, allegedly). Vicar of Dibley, Mary McGeary, wore a dog collar and a clerical necklet (that looked suspiciously like a purple ID Lanyard) and Tinkerbell (Julie Reza) had clearly raided her entire store of silk flowers for her floral crown and leafy boa. In certain lights her Rotary-branded wand did look surprisingly like a fly swat. King Farquard (aka Martin Ward) wore a plush, fur-lined crown that some unkind persons mind have suspected was a large tea-cosy. Narrator, Peter, was suitably attired in white dress coat and bow tie, as befits the host of a Hollywood-style show. The Dragon, Phil Abbott, was all in fluorescent green with some rather fearsome makeup (we think; unless he has developed an unpleasant rash while stuck at home). He joined the performance from some unearthly part of Canterbury that bore a close resemblance to Zoom's “Northern Lights” backdrop; it could, of course, have been stinkin’ green steam rising from a pile of landfill (which is why our Club really wants to help reduce landfill waste).

However, the best costume award for the show should go to the evil Fairy Liquid (aka Bob Anderson), who paid appropriate homage to the utilitarian surfactant, enhanced with pink t-shirt and matching pale pink tutu (which, for some reason to do with binge eating during lockdown, no longer seemed to fit his waist - so was worn on the arm.) Although none of the audience was able to check if the softness of his hands did, indeed, match that of his face (as proclaimed by the famous Fairy Liquid ad), he was definitely up for the prize for most dishy (or dish-y?) outfit.

The plot certainly wasn't prosaic and a few puns and jokes were thrown in. (Knock, knock; who's there?; Abbey; Abbey who?; Abbey Birthday to you!) And, as has happened to so many during this time of lockdown, Tinkerbell complained that her Amazon order for new wings had got mixed up with Kentucky Fried Chicken. (NOT finger lickin' good, her wings proclaimed!)

A word on set design - it was remarkable how the set designers had managed to capture the ordinary homes of people in Canterbury in such an avante-garde fashion. Books, papers, pictures, crockery, all carelessly strewn over the set and amongst the audience - clearly no expense had been spared in that area and no cleaner had been employed, and it showed. Fully commendable and we expect there will be an Oscar going that way soon

Finally, audience participation was encouraged, especially during songs, which led to some rather melodious - sorry, mal-odious - Zoom tuning effects. Nonetheless, a good time was had by all (we hope!) - including visitors from near (Rotary Club of Canterbury Sunrise) and far (Singapore)! We were even joined by the Assistant Governor for our District (1120), Kevin Fielding, who was rather relieved that he didn’t have to marry Princess HokeyCokey after all. What a happy ending!