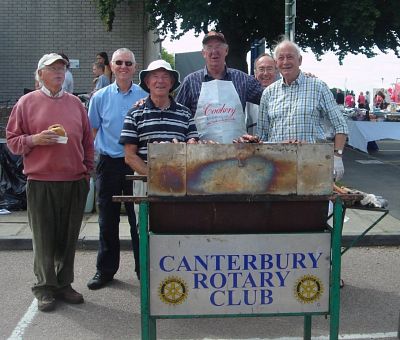 In a first for our Club, President Neil Fraser was delighted to award Rotarian Bob Anderson a Paul Harris Fellowship by Zoom at our AGM yesterday!

Bob has been a member of our Club since 2000 (20 years), and is very active in his membership. Most recently he has helped us to secure funds for the Prince of Wales Youth Club in Canterbury so that they can distribute lunch packs to the families of needy local children affected by the coronavirus crisis.

Until the crisis, Bob was also spearheading our campaign to help our local specialist day nursery, Honey Bears, based at Kent & Canterbury Hospital.

He is one of our Club's members that is usually out and about doing Rotary activities. For instance, he played an active role in the establishment of a Tools for Self Reliance unit at Pilgrim's hospices in Canterbury and has often assisted in the procurement of tools (or other interesting items!)

During normal times, Bob has been very active buying supplies for Canterbury Food Bank or even collecting together stamps to support a local hospice. He's always happy to put on an apron for our BBQ at the League of Friends Annual Fair for K&C Hospital and has been spotted wearing unusual headgear when selling ducks for our annual Duck Race. He also comes up ideas for ad hoc fundraising - such as our caption competitions!

Readers may be interested to learn of his unusual family ancestry too, which he shared with us as part of a series on members' hobbies that we hope people (including other Rotarians) might want to read while in lockdown.

A teary Bob said he was honoured to receive the Paul Harris award - which we believe is the first in our Rotary District to be awarded "virtually" by Zoom!

Congratulations on the award Bob, and here's to many more years of "Service above Self"!

Bob joins other notable figures such as U.S. President Jimmy Carter and polio vaccine developer Jonas Salk in receiving the award. Read about the history of the award here.