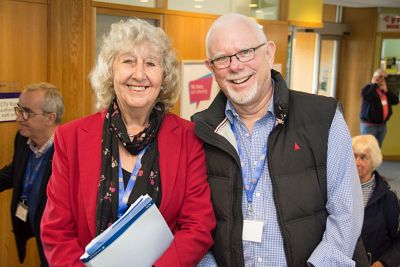 The weekend started on Friday 19th May with a reception at Augustine Hall, part of Canterbury Christ Church University (CCCU), overlooking the city and the cathedral. In his welcoming speech, Canterbury President, Martin Ward, welcomed the visitors and underlined the poignancy of the weekend – the first since the 2016 EU Referendum. “Who would have imagined, just a year ago at Pentangular 2016, when I extended the invitation at last year’s Pentangular in Lüdenscheid to come to Canterbury in 2017, what political upheavals lay around the corner”. He said. Martin explained the programme for the weekend and asked everybody to be on the alert and look out for surprises…

From there the visitors were taken to weekend hosts or hotels before going on to have dinner in other Canterbury Rotarians’ homes. For the first time in recent Pentangular history, all the Pentangular Presidents, the Immediate Past Presidents, the Presidents-Elect and the Vice Presidents and their partners took part in a combined informal dinner. This was held at Canterbury’s historic Kent and Canterbury Club and was deemed a great success.
click or tap any image to enlarge

So, Saturday dawned and the activities started with coffee at Old Sessions House and a meeting to review and discuss the international aid projects that are a core part of the Pentangular relationship. An update on the closing Orthotics project in the Democratic Republic of Congo, managed by the Leuven club, started the proceedings. This was followed by Canterbury previewing the project to support educational bursaries at a secondary school in Juba, South Sudan. And the meeting also heard from St Quentin and Leiden as they outlined their forthcoming overseas projects.

Now the core theme of the weekend, music and history, took centre stage. The group divided into two; whilst one group made the short journey to the nearby St Martin’s Church, the others made the way to the equally close St Gregory’s Performance Centre. At St Martins, the Canterbury Gregorian Society under the direction of Helen Nattrass, told the history of Canterbury from Alphege to Becket using contemporary text and music. At St Gregory’s, the music department of Canterbury Christ Church University, under the guidance of Head of Music, Dr David Allinson, provided a musical showcase that included a chamber choir, a string quartet and a Big Band.   To ensure everybody saw and heard everything, the groups changed over and the performances reprised.

Lunch was taken in the CCCU refectory along with the first surprise of the weekend. Top Choir Kent winners, The Elham Valley Voices, under the direction of Musical Director Jackie Spencer, treated the assembled group to a medley of Mary Poppins and other songs. The young singers aged from 5 to 15 entranced all those present were a unanimous hit.

The music and history theme continued during the afternoon with a choice of visiting the Beaney Institute (Canterbury Museum and Gallery) or attending Choral Evensong at the Cathedral. After Evensong, Dr David Flood, the Cathedral Organist and Master of Choristers performed a special recital on the Cathedral featuring works by composers from all five Pentangular countries.

The pace of a Pentangular weekend is fairly frantic but there was just enough time for everybody to get ready for the Gala Dinner back at Augustine House preceded by a champagne reception on the terrace. President Martin Ward used the occasion to present Paul Harris Fellowships (Rotary awards for exceptional service ) to two Canterbury Rotarians; Peter Hermitage and Sidney Denham, as well as investing Dr David Flood as an Honorary Member of the Canterbury Rotary Club.

It was then down to Augustine Hall for a superb dinner followed by dancing to Canterbury’s hottest dance band, The KD Jazz Dance Orchestra. Again, everybody had to be on their guard for surprises when the evening was (purposely) interrupted by the visual comic, Bruce Airhead, famous for getting into a huge balloon wearing little more than an Edwardian swimming costume before emerging dressed as Elvis Presley!

Sunday morning provided a counterpoint to the celebrations of the night before. It provided an opportunity to reflect on the deeper meaning of service of Rotary and how the strength of Pentangular can do good in an uncertain world. At an Ecumenical Service held in the St Augustine Chapel of Canterbury Christ Church University, the former Archbishop of Canterbury and Honorary Canterbury Rotarian, Lord Carey of Clifton, preached on Rotary’s ability to be a force for good by: “Punching holes in the darkness”.

After the service brunch was served to fortify everybody before they set-off on their journeys home. But there was still one more surprise – outside the chapel there was the most English of scenes with the Oyster Morris Dancers laying on a special performance. Our foreign guests loved it with many ended up taking part.