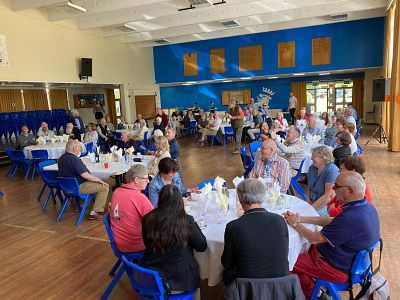 Day 2 of our Pentangular weekend saw our European guests being introduced to the picturesque town of Faversham where they had a bespoke tour of Queen Elizabeth's Grammar School and the Shepherd Neame brewery.

It's a great honour to host the guests from our four fellow European Pentangular clubs [St Quentin (France), Leuven (Belgium), Lüdenscheid (Germany) and Leiden (The Netherlands)] and to show them a part of the world they may not have visited otherwise.

Faversham, just a short car journey away from Canterbury, falls in the borough of Swale. Historically it was a market town and it still has many of its historic buildings, one of which is the original half-timbered building of Queen Elizabeth's Grammar School.

Our visitors met up in Faversham and there, after a short welcome and introduction from Phil Harvey (head of the Technology and Art Faculty) in which the relationship between ourselves and the school was showcased, they divided into four groups which took it in turns to tour the school and the brewery. After lunch at the school with the students and teachers the groups did a swap.

Those that went to the brewery had a fascinating time being shown around the site, learning about the art of brewing. They got the opportunity to see huge fermentation vessels and other equipment. Those who wanted to also had an opportunity to taste some of the beer. "During the visit we had the chance to learn about and understand lots of terminology," said a one of the enthusiastic visitors. "We now know all about terms such as 'mash', 'liquor', 'malt' and 'crumb'," said another, before adding "lots of good words for scrabble!".

At the school the visitors had a tour of its facilities and learnt about the international F1 in Schools competition (you'll remember we help sponsor a team from the school, "Team Eclipse"). In the new Design and Technology Centre the visitors had a chance to test their reflexes on the speed track and meet members of Eclipse. "It was really very good," said another visitor on summing up the visit.

In between, there was a chance to pause in front of the original school (back then, Faversham Grammar School) which was founded in 1527 by John Cole. The property was confiscated by Henry VIII when he dissolved the abbey in Faversham in 1538, and the school had to close before it reopened following a petition to Queen Elizabeth I.

It seemed everyone had a splendid time in a trip which packed in a lot. "The sun shone on our walk from the brewery to the school - which was very lovely," said one visitor. The market was open as well, which proved a tempting draw for many.

At the end of the day the visitors headed back to their hosts or hotel for some rest before the evening's dinner and entertainment - more on that in another article!