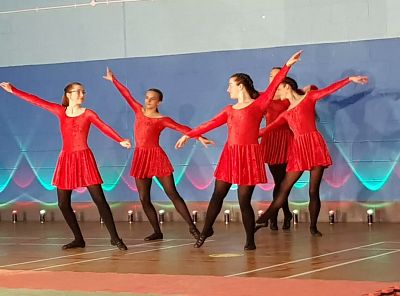 Our Pentangular gathering of five European clubs went out on a high yesterday thanks to the Prince of Wales Youth Club, which put on a great show with boxing, judo, Irish dance, modern dance and singing. Food too! The youngsters did a super job!

Our Club has long supported the Prince of Wales Youth Club and it was wonderful to be able to introduce our international guests to the club and show them some of the amazing work that goes on there.

The club itself is based just off Military Road in Canterbury and is run by Joey Wicks and his enthusiastic staff.

Guests and Canterbury Rotarians gathered in the main hall of the club for a coffee and Danish pastry while PP Peter Hermitage welcomed everyone to the club - of which he and several other Rotarians are Trustees.

Before the performances we had some Rotary business to deal with. Our President Stephen Thompson invited the Presidents of the other clubs to join him as he announced which of our visiting clubs would take custody of the Pentangular Clock - a clock given to the visiting club with the most members attending Pentangular. This year the award went to the Rotary Club of St Quentin (from France). There were plenty of loud cheers and chants of "St Quentin, St Quentin" from the French contingent when their President, Francois Marquis, was handed the clock.

Another Pentangular tradition is for each club to contribute 400 Euros to the charity of their choice. The choice, not surprisingly, was the Prince of Wales Youth Club in recognition of all they do and to help them continue their good work. A cheque for over £1600 was handed over to Alan Lingham, Chairman of the club. Everyone was then invited to Leiden for Pentangular 2023.

Francois congratulated Canterbury for the Pentangular programme - "yes, you did it!" he exclaimed. He then recounted a little story of how, some years ago, he had fallen for a very nice lady. "The more I saw her, the more I wanted her," he said, telling us conspirationally that "when you know her, you will never walk alone". Who was the wonderful lady in question? Pentangular, of course!

The other Presidents also voiced their congratulations and thanked Canterbury for "an opportunity to meet old friends and make new ones!"

Peter then handed over to PP Phil Abbott - another Trustee - to tell us all about the history of the youth club. We learned that the club had started as the Canterbury Lads Club back in 1929, with youngsters mainly from poorer homes. In 1977 the Northgate club burnt down before it moved to the current building in 1983. Last year, as regular readers will know, the club was given a Queen's Award for Voluntary Service - the highest award that a group in the voluntary sector can receive.

Next, Joey told us about his own involvement with the club. "I got here by mistake," he said. He was once a member of the club himself and he pointed out that this was also the case for many of the staff members – as he introduced us to some of those present. The club now has around 500 young people per week using its facilities, with the range of activities on offer continually expanding. For instance, the club recently set up a forest school.

A group of the visitors then went to Church while those left behind were treated to a fantastic set of performances.

First, we had a super demonstration of boxing by four young boxers. It started with some skipping. Despite the calm focus of the youngsters it was astonishing to see the speed, dexterity and concentration involved. Then we saw some controlled sparring and boxing of punch bags - with Joey telling us that boxing is an art. Joey emphasised the importance of discipline, adding "we will NOT accept violence outside the club". One of the Presidents (with some boxing experience) went forward for a bit of mock boxing - with Peter quipping that he was "the only boxer in the world who boxes with glasses on!"

Next, Alan, a former International Judo referee who is currently head coach of the Judo club introduced us to members of the Judo club. They all impressed us with routines and throws under the direction of multi-black-belted Mike. It was remarkable to see how nimble and swift the youngsters were - with some looking very young indeed.

The excellent Judo display was followed by dancers from Sarah Dean's dancing group. Sarah, who runs the Dean Academy of Performing Arts, told us about the dancers - some of whom started dancing as young as five. The advanced troupe performs at weddings, parties and charity events.

The youngsters put on a wonderful set of performances for us - Irish dancing, modern dance, and some were singing solo too.

With an interlude for everyone to get lunch (cooked by the club's chef and served by its staff), the performers continued with their routines, each met with a round of loud applause.

All-in-all the outing to the club and the Pentangular weekend were deemed brilliant successes. Several visitors seemed to shed a tear because of the captivating performances by the youth club members. "Honestly, at one point I just had to let the tears flow, " said one visitor, adding "the respect for their teachers, the passion and love for what they were doing was so apparent". We are sure that everyone there had a wonderful time.

We look forward to continuing our relationship with the club and hope our visiting Rotarians will go back with great memories and great things to say about the youngsters.

And so Pentangular came to an end - until next year! Thank you to all that attended and to all those that worked so tirelessly behind the scenes to make the weekend such a success.

You can find out more about the Prince of Wales Youth Club here.

Picture: The dancers perform one of their routines. Picture credit: Rotary Club of Canterbury.

We hope to have more pictures from the Pentangular weekend on our Facebook page soon.