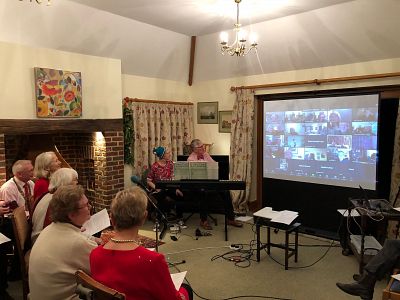 We had a wonderful five-country evening of Christmas carols with our fellow "Pentangular" Rotary Clubs in Germany, France, Belgium and The Netherlands yesterday - all thanks once again to Zoom! It was a lovely way to celebrate this festive season!

According to Wikipedia, a strong tradition of popular Christmas songs in regional native languages developed in the 13th century in France, Germany and Italy, with Christmas carols in English first appearing in a 1426 compilation of ""caroles of Cristemas". Our group of Pentangular clubs might not have such a long history - but we will be celebrating our 50th Anniversary next year, and it was lovely to celebrate our many years of friendship with some seasonal singing last night.

Our five Pentangular clubs are St Quentin (France), Leuven (Belgium), Lüdenscheid (Germany) and Leiden* (The Netherlands). Pentangular is one of the largest grouping of contact clubs in RIBI District 1120. Our Club decided to see if we could organise a five-way evening of carols - and thanks to a number of emails and calls our efforts came into fruition yesterday, with a full programme for the evening.

Over 41 "participants" joined from the five countries - the actual number of people being much higher as several Rotarians were in groups or were joined by family and friends. We certainly spotted one or two young children looking in!

The evening was kicked off by Stephen Thompson, President of our Club, greeting everyone from his home where he was joined by a number of Canterbury Rotarians. Rotarian Nan Miller then did a translation of his welcome into French.

Stephen handed over to Erik Vanderlinden, Chairman of the Leiden club, who gave a warm tribute to the late Wolfgang Keller, former Chairman of the Rotary Club of Leiden who passed away at the start of December. Wolfang was a popular Rotarian and known to many Pentangular members. Referring to some hard times Wolfgang had faced, Erik commented "I am convinced at such moments he could find consolation with his friends at Rotary." A short silence was held in Wolfgang's honour.

Stephen then announced the start of the evening's festivities - with Leuven starting things off with the first carol.

Dressed smartly in white shirts and black bow ties, the Belgians started with a gentle Dutch/Flemish song called “Suza Nina”. Due to the same song choice as another club's, they told us their second song would be "a surprise". And it certainly was - it had barely started before we recognised the familiar tune of "O Come all Ye Faithful". The third carol was "Stille Nacht" - the song we know in English as "Silent Night".

Francois Marquis, President of St Quentin, then introduced some short videos from his club. The first video, filmed in the Basilica of Saint-Quentin, started with all the singers with their backs to us (showing the Rotary Wheel of Excellence on their jackets). They then turned (one by one, as Francois introduced them to us) and proceeded to sing "Angels in our Country", a song that many here would recognise as "In Excelsis Deo". The next tune, sung in a slightly different venue, was "Les Copains D’abord" (friends first) from Georges Brassens - sung in honour of our friendship. The third song, "Noël Jazz", was sung before a traditional nativity scene. True to the nature of the tune, there were "jazz hands" at the end.

Stephen then introduced Jos van den Broek, President of the Leiden club. The first tune from the group of Dutch Rotarians was "Nu Zijt Wellekome" (a 17th-centrury Dutch carol; they sung the protestant version), followed by "Maria Die Soude Naer Betlehem Gaen" (an early 17th-century Flemish carol), sung with lovely harmonies. The third song was "Drie Koningen" ("Three wise men: gimme a new hat!" - a short begging song about the three wise men from the East, originating from central North-Brabant. Two Rotarians were born there and know the song from their early childhood).

Next, it was our Club's turn. Dressed in festive red and white and singing live from Stephen's home, our members (including Santa, his double and Rudolf) were accompanied on the piano by PP Robin Vickers and on the flute by Robin's wife, Avril. First they sang "In the Bleak Midwinter" (originally a poem written by an English poet in 1872), and then "Good King Wenceslas" (written by John Neale in 1853). Finally, they sang "Rudolph the Red-Nosed Reindeer" - just for a bit of fun! Plenty of bells jingled along as they did so.

Wieland Pavel, Lüdenscheid President, told us "I did not find singers in our club". Instead he introduced us to his wife, Ina, who read out the well-known Brothers Grimm story of "The Elves and the Shoemaker", in which a group of elves help a poor shoemaker make shoes. To give them thanks, he and his wife make a small outfit for each elf, including tiny shoes, in return.

Wieland and Ina then gave greetings to everyone - wishing them a "Happy Christmas and New Year" in four languages.

Reminding us somewhat of Katie Boyle from the Eurovision Song Contest, Stephen then called out "Hello Leuven" - and proceeded to ask each club by turn if they were able to sing a verse of the final song of the evening, "We Wish you a Merry Christmas". After a cheerful rendition of this, the evening ended with Stephen thanking everyone who attended/took part and inviting the other clubs to join us for our Pentangular event next year, hosted by our Club here in Canterbury.

*In 2010 Leiden replaced Utrecht, one of the original Pentangular clubs.