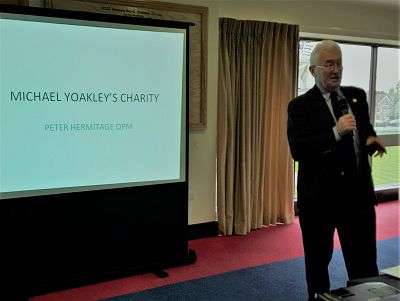 Past President Peter Hermitage stepped in at short notice at our lunch meeting on Tuesday to talk about Yoakley Care, a local Charity based in Margate for which he is Chairman of Trustees.

Peter started his talk with a little bit of scene-setting, taking us all back in time to the mid-17th century - a time when large numbers of people right across the country faced great hardship and poverty. This was well before the days of a welfare state, so things were especially tough for the poor and elderly.

It was against this backdrop that, in 1631, Michael Yoakley was born. Michael started working as a farm labourer at Draper's Farm (where the Charity that has his name is located) as a young boy. Concern about his mother, who had been widowed early, led Michael to become a ship's boy in order to earn more money. He worked on a hoy (a small boat) that carried items such as barley, hops and coal up and down the busy Thames Estuary, between London and Kent. One day the captain died ... and Michael took on the responsibility. From there Michael eventually went on to buying a hoy of his own, then several other vessels, and eventually he was doing trans-Atlantic trade and shipping. For instance, his ships were taking Pilgrims to Pennsylvania in the newly discovered America. It was at this point that Michael became a Quaker.

Michael did well in life and was able to amass property, wealth and land. Some years later, in 1708, Michael died. In his will he had stated that his assets should be used to provide accommodation for the “deserving poor” older persons of the Margate area - no doubt influenced by the concern he had for his mother during her lifetime.

In 1709 the first Trustees of the Charity met and subsequently built a number of almshouses for poor men and women - Drapers Homes. Those first homes are still in use by the Charity. Two more wings of almhouses were built in the 1850s (making a total of 48 almshouses), and a Care Home was added in the 1980s, all set in beautiful, tranquil surroundings.

The Charity now provides sheltered housing, residential care, and respite care. The almshouses are reserved for those of limited means, who have a character close to that specified by Michael Yoakley himself: “No busy-body, nor proud idle person, nor waster, but careful and diligent as much as in them lieth, labouring with their own hands for a maintenance, being of good life and Godly conversation as becometh the truth and the Christian religion.”

The original aim of the residential care home was to provide personal care for almshouse residents no longer able look after themselves. But a shift in government policy in recent years means the current aim is to keep residents in their own homes for as long as possible, meaning that Yoakley House is now able to offer residential care places to those in need in the wider community.

Such homes play a very important role in society. Peter reminded us that the number of elderly is steadily increasing, with a growing number of people who are frail and suffering from co-morbidities. As an example he told us how, nationally, the growth of the elderly population is predicted to become 13 times the population of Thanet. Meantime, their carers are increasingly getting older. An increased demand, combined with a lack of funding, means that the social care system for the elderly is facing collapse. Peter suggested that the voluntary sector could help the public sector shortfall.

Peter told us how he'd recently been going through some of the records and documents stored at Friend's House in Euston (London), gaining fascinating insight about Yoakley and the Charity - coming across potentially valuable items while doing so.

The Charity has a break even budget of £1.2 million, and is currently trying to raise £4 million to develop the respite care centre with custom built facilities for the delivery of respite care. Planning permission is already in place for the centre, which is to be developed next to the Queen Elizabeth the Queen Mother Hospital in Margate. Rotary (Thanet Club) has already provided some funds towards this project, but clearly a lot more money needs to be raised for Yoakley Care to reach its target.

To find out more about the Charity, click here.