Club members at Past President Peter Hodge's induction in Essex 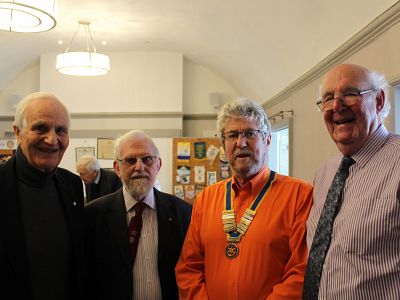 Two of our Club members, Tim Brett and Bob Anderson, went to Great Dunmow, in Essex, to support Past President of our Club (and also immediate Past Secretary) Peter Hodge as he was inducted into his new club, the Rotary Club of Dunmow.

Peter has moved to Essex to be near family. The Rotary Club of Dunmow, like our Club, is a dual gender club. It is based in Great Dunmow, an "attractive market town nestling in the heart of rural Essex". Members of their club are drawn also from surrounding villages including Takeley and Little Canfield (near Stansted airport), Stebbing and Thaxted. Some members live further afield, but work in Dunmow. Currently the Club has around 48 members.

We would like to thank the Club and its President, Michael Lodder, for their kind invitation and hospitality. The Club welcomed our visitors very warmly and we are sure that Peter is going to settle in quickly. We shall miss him at our own Club of course - our loss is very much their gain! We wish Peter well and look forward to hearing about his new activities and adventures in due course.