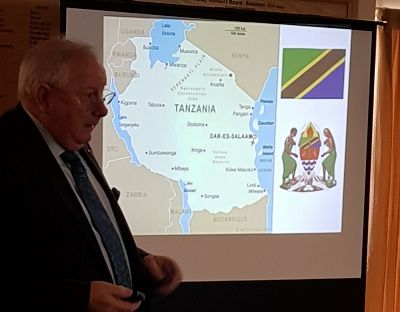 Rotarians were treated to a moving yet positive talk today from Peter Warr, Chairman of Team Tanzania, a Canterbury based charity that supports a number of projects in Tabora, Tanzania.

Peter highlighted the lack of facilities and poor conditions in some of the places that the charity works - from poor clinical facilities in hospitals to a lack of toilets and scarcity of water. Peter recounted one heartrending story about a man who had walked a long way to the hospital with his four year old daughter bundled on his back. The man said his child had malaria and needed some medicine. Sadly, as the hospital staff unbundled the child they found she had passed away. That was hard for Peter to see - but harder still was having to bundle the little girl's body back on the man's back so that he could carry her home to his village for burial.

The charity has helped build and equip three hospital wards - with treatment free to those who are poor. Peter also told us about the work they do with prosthetics ('for the price of a nice meal out'); with HIV-infected youngsters; and with the blind and visually impaired. He also spoke about water and sanitation projects and projects providing books to schools. Our international committee have previously given a donation of £700 to Team Tanzania; Peter told us that this has been used to buy beehives and equipment which will help support around 100 families; by next year they hope to support around 350 families with the project. Prior to this the children had been breaking stones for a living. Peter - who was a civil servant but now does glass engraving - was very engaging and the vivid pictures he showed us spoke for themselves. Peter even managed to raise an additional £20 for Team Tanzania with an ad hoc auction!
For more about Team Tanzania.

Picture: Peter tells us a little bit about Tanzania and the area in which Team Tanzania works. Picture credit: Rotary Club of Canterbury.