Two members of the Rotary Club of Canterbury have recently returned from India where they took part in a mass exercise to help inoculate millions of Indian children to end the scourge of poliomyelitis (Polio). Rotarians Caroline Lees and Sidney Denham, along with Sidney’s wife Evelyne (corr), joined a party of nearly a hundred Rotarians from the UK who were taking part in the Indian NID (National Immunisation Day) - part of Rotary’s PolioPlus campaign to eradicate polio worldwide.

The Rotarians were helping target up to 65 million children living in the regions of Bihar, Uttar Pradesh and Delhi where Polio is still endemic.

Caroline and Sidney were joined by Suzanne Taylor-Warren of the Canterbury Sunrise Rotary Club and the group was located in the slums of the Indian capital, Delhi.  On one occasion they were operating under the watchful eye of the Delhi Region Minister of Health. 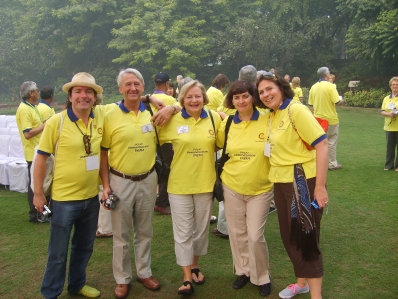 Click here for press release and pictures relating to this story.