As soon as they saw that we had toys the older children ran off to bring in their younger brothers for inoculation. Then when there we no young ones left they tried to recirculate those we had already seen. The health workers were expecting this and they had marked the little fingernail of each child who had been given the two drops of the polio vaccine.

In temperatures of 43C (109F), we had been taken by the Rotarians of one of the three Lucknow clubs to a primary school deep into the slum. The streets were narrow; there were piles of rubbish that had been picked over first by those who lived there, then by their goats, followed by wild dogs and finally the sacred cows that seemed to be everywhere. There were no sewers and no safe water nearby. 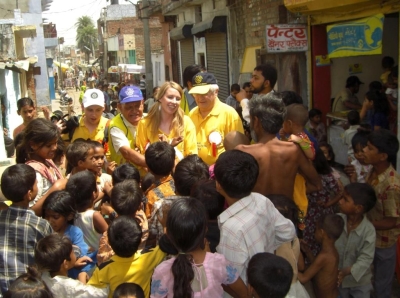 Above: Rotary volunteers are ambushed by local children
as they try to leave the booth located in a Lucknow slum.
The children want the pens and pencils that the volunteers
were offering as a treat after the inoculation.

As a member of Canterbury Rotary Club, I joined a party of 12 Rotarians from English clubs who had paid their own way to witness one of eight National Immunisation Days. We were in Lucknow whose slums were one of the last areas on Earth where polio was endemic. Wipe it out here and in similar slums and this awful disease will be eradicated forever.

Bill and Melinda Gates had chosen to support the Rotary movement’s long term campaign to eradicate polio with a gift of $100m and challenged Rotarians the world over to match it. We were there to see for ourselves and then take the message back to our clubs and our communities; we need to start fundraising!

Earlier that day bands had played as the Principal Secretary, Medical and Health for Uttar Pradesh, Neeta Chaudhary, had welcomed us: “The greater the number of people coming forward for this cause, the better it is for us. We are encouraging them to go along with the present volunteers in house-to-house visits as well.”

In the West the cure for polio has been just some drops on a sugar lump. In the slums of Uttar Pradesh and Bihar the virus is endemic and exposure is almost continuous so the dosage must be repeated each month. The health workers said that as these polio drives were so frequent, it sometimes becomes monotonous for them as well as the officials. 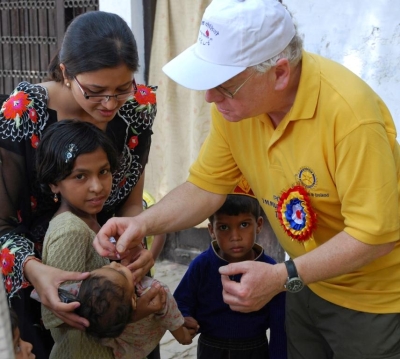 Above: Polio drops are administered orally, only two
dropsare needed every month to prevent infection.

The vaccine had to be kept at -20C until used. We were shown the supply chain that delivered the doses from health clinic freezers; taxis were loaded at 4am with supplies for the 2700 teams who waited in empty clinics, shops, cross roads, train stations, parks, in order to find as many under-fives as they could. A local Rotarian, Ajay Kumar Saxena, director of an electrical contracting firm, had led negotiations that had opened up a new slum area to the teams. That day 800,000 doses were given – same again next month!

Why does it matter?

The eradication of polio should have been a simple matter, however Uttar Pradesh and Bihar are struggling as their disease control scientists have found evidence of mutation in the virus that has produced resistance. Further mutations could produce strains that the West is not prepared for; they are one plane journey away.

Motivation is needed on a vast scale; local Rotarian Clubs are in the midst of communities, giving close support at local as well as national level. They are retired service personnel, doctors, accountants, company directors, lawyers, university professors just like we are in the UK - a And are doing just as we would do in similar circumstances.