Collecting for the Poppy Appeal 2017 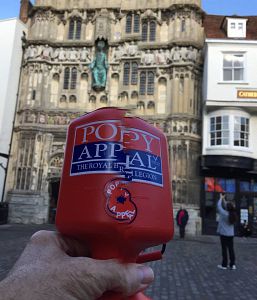 Club members have been out in Canterbury supporting the Poppy Appeal over the last few days. We'll also be collecting on the 4th & 6th-11th November.

The Royal British Legion have asked the nation to Rethink Remembrance: "Recognising the sacrifices made by the Armed Forces community, past and present".