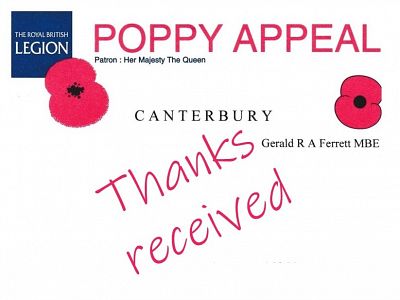 We have just had the figures in for our help with this year's Poppy Appeal by the Royal British Legion, with the local branch informing us that we helped collect over £3,500!

As we have previously reported, our Members were out-and-about helping the Royal British Legion around Canterbury earlier in the month. Our Club has had a long relationship with the Royal British Legion, and this latest amount takes the total that we have helped to collect over the years to well over £40,000.
Gerald Ferrett, MBE, the local Poppy Appeal Organiser, wrote a letter to thank our Members for the "exceptional total" and reminded us of the constant need for funds.
Club President, Stephen Thompson, expressed his thanks to all of our Members that helped with the appeal for "a wonderful effort." He gave particular thanks to PP Alastair Scott who collected £1347.64. "He was out on most days in all weathers," said Stephen.
We are of course grateful to everyone that gave a donation and we hope you will support us when we are out again next year.
In the meantime, there are many ways that you can continue to help the Royal British Legion - take a look at their website here for further details.
Picture: Letter of thanks!