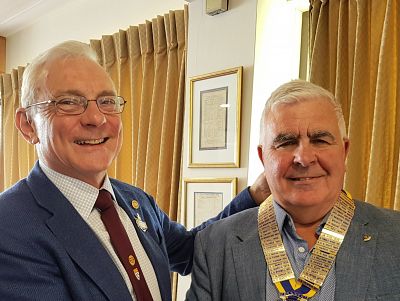 It was "all change" today at our Club as we held our annual Presidential Handover - this year from Stephen Thompson to Tony Loughran. It was great to hear from both - Stephen reviewing his year and Tony setting out his.

The meeting started in the usual way - with our "thought for the day". This time it was Past President Philip Abbott who said a few words. "We've all done wonderful things," he said, remarking with amusement that there was a view, some years ago, that our Club would be extinct by now. But not so - "we survived extinction by 10 years". Philip touched on how well we all had dealt with the challenges of Covid, led by "Team Thompson" (referring to Stephen and his wife, Sue). Philip spoke of our Centenary, and Pentangular's Golden anniversary. "I think you'll all agree that Stephen and Sue did a great job together," he said, to a resounding round of applause. He then handed Stephen and Sue a woodcarving made by his father, Ted Abbott, a former Member of our Club. Carved by hand, the sculpture represents a hand carefully holding an egg..."to mark how carefully you both handled your Presidential year," added Philip.

Following receipt of this unique gift, it was Stephen's chance to give out something (as usually happens at handovers): the award for Rotarian of the Year was presented to PP Martin Ward. "While there were several contenders for the trophy this year, I have to say that only one person has been head and shoulders [above others], and an absolute star". Among many, many other things, Martin helped set up our Club's "combi" system (Zoom/real life hybrid meetings) and organised two of our Centenary events - one following the sad demise of Rtn Bob Anderson.

Stephen then took us back to last year's handover - in which he'd said his “sole aim” was to bring the Club back together again (following the pandemic) and have "fun whilst we do it!" Cheerfully he announced - "and we have achieved that!"

He spoke briefly of the sadness the Club has felt during the year with the loss of "five good friends" - Bob Anderson, David Barton, Ken Beere, Roger Bickerton and Roger Clarke. All missed.

"Rotary moves on, as it must" continued Stephen, reminding us that we have had new members join too - Viv Hird, Jim Gascoyne and Keji Moses. He went on to review some of our highlights, including speakers and trips on the "food we eat" theme, various events (both fundraising and social) and of course, our Centenary and Pentangular anniversaries. He spoke of the way we’ve started to work with our sister clubs - including our combined efforts for Ukraine, through which we have already raised several thousand pounds (and plan to raise more).

Stephen spoke of "The Point" - our Drinking Water Refilling station that we hope to gift to Canterbury to mark our Century. We’re currently awaiting a decision on a grant application.

"I'd like to thank every one of you for your friendship and support over this past year," said Stephen, adding "It has been a pleasure and honour to be your President". He then spoke of how he was especially pleased that it was his "good friend, Tony, who takes over". (The two were once members of Round Table and there, 29 years ago, Stephen had similarly passed the office to Tony.) Stephen then invited Tony forward and placed the Presidential Chain on Tony's shoulders.

Tony then took the Presidential Chair, stating that his first job was to pass on the Chain of President Elect to Rosemary Doyle. He then smiled as he said he also had a “jewel” to give to Stephen - the special badge of Past President. There was one more surprise for Stephen - a poem titled "Follow in my Footsteps", read out by Sue, commemorating the three generations of Stephen's family that have been Past Presidents of our Club. Everyone gave Sue & Stephen a round of applause.

Tony also praised Stephen on his year in office – “he's a quiet and modest man, but puts in more than 100% effort," he said. As thanks for the effort she has put into the Club, Tony invited Sue to receive a gift from the Club - specialty gin and glasses "so that you can both now sit there and just enjoy yourselves!"

Tony commented that he was now our Club's 101st President. "I looked up on Wikipedia to find out what's interesting about 101,” he said. “Not a lot," he quipped " mainly book titles!"

Tony followed with a brief summary of the programme for the year ahead, and plans by our International, Community Service and Vocational Committees. Referring to the latter - "we will continue to support the youth of today," he said. In fact, his first official duty as President will be tomorrow, at the Final of our Innovation Competition.

Finally, the microphone was handed to our Assistant District Governor Kevin Fielding. "Behind every good President there's a good team...but that team also needs support from the rest of the Club,” he said, praising our Club. ”You certainly punch well above your weight". With that, he proposed a toast to our immediate Past President Stephen, our new President Tony, and all the Members of our Club!

Picture: Stephen hands over the Presidential chain to Tony Loughran. Picture credit: Rotary Club of Canterbury. (Further pictures will be added to our Facebook page soon.)