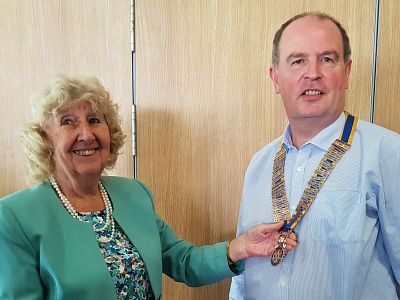 Yet again it's that handover time of year, and we were very pleased to welcome our new President Neil Fraser into his role following the handover from our outgoing president, Dr Margaret Griffin, at our lunchtime meeting on Tuesday.

With so much going on, our outgoing President Margaret has had a hectic year - and her duties continued up to the very last minute with the induction of Philip Abbott to our Club. Philip is very familiar to our members as he was a member until moving to our sister club, the Rotary Club of Canterbury, Sunrise - indeed he was Past President of our Club for 2006/7 and his relationship with us goes back even further as his father was also a member a few decades ago. It was apt that we had Sinitta Nightingale, the Speaker's Secretary from the Sunrise club visiting us, as Philip will also be taking over from PP Alan Forrest in that role at our Club. We hope that interaction between Philip and Sinitta and other members will bring our two clubs closer together and we look forward to joint activities. There will be an induction article soon - for now, suffice to say that Philip said: "It's good to be back!"

Bringing her year to a close, Margaret said: "This has been a very busy and very successful year. Although there have been ups and downs, I'm pleased to say there have been far more ups than downs!" Margaret voiced her thanks to members that have supported her in her year - in particular, three of the senior past presidents. One of the highlights of the year has been our close work with the Prince of Wales Youth Club - and the successful, co-hosted Boxing Evening fundraiser. "It was the first time we had girls boxing," said Margaret, "and I must say that I was impressed by the professionalism shown during the entire evening by all involved". Margaret also praised those involved in putting on the "Old Bull & Bush" musical fundraiser. "It was splendid," she said. "So many people came and were able to mix!" Both events attracted potential members, and Margaret was delighted that we had two new members - both female - join the club during her year as President.

Margaret said that working with the two large Universities in Canterbury will be very important and looks forward to that. "We also raised a tremendous amount of money for others - tragedies such as Cyclone Idai and also for the Lord Mayor of Canterbury's Christmas Fund, among others," said Margaret, "on top of which £2,600 has been raised specifically for the three Presidential Charities - Porchlight, the Juba school and Canterbury Food Bank." Finally, Margaret wanted to thank all who supported her and wished Neil "a happy and successful year," adding "I hope that you can enjoy every bit of it!"

Our Members gave Margaret a warm round of applause before she handed over the Presidential chains of office and Pentangular clock (which our Club won for having the most representatives at the last Pentagular meeting) to Neil.

Neil has already spoken of his plans for the year ahead - but he wanted the re-emphasise three things: Rotary Foundation grants, increasing membership, and looking at how the Millennium Scholarship Trust Fund may best help youngsters that need assistance. "What impact can the fund have on young people in this area?" he asked us to consider. He also reminded everyone about his three Presidential charities (see below) and his hope that we will "get closer" with other Rotary Clubs. As he said, "Rotarians are a nice bunch, let's engage with each other more!"

With the handover, Rtn Alan Mepstead now becomes President Elect and will chair the Club Service Committee while Neil will chair Club Council. We wish Neil and Alan all the best in the year ahead, and hope that Margaret gets some time to relax after her presidential duties!

To find out more about the President Neil’s chosen charities, click the links below:

The Prince of Wales Youth Club