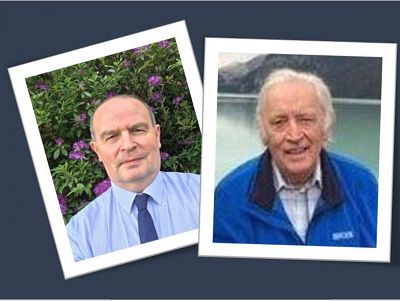 On Tuesday our Club marked another first - its first VIRTUAL handover, with outgoing President Neil Fraser handing over the Presidential reins to our incoming President, Alan Mepstead, while online.

Speaking for the last time as Club President, Neil looked out over the "sea" of over 45 Member's faces on Zoom to say "You're a great bunch of people doing lots of stuff for the community and beyond"; he encouraged Members to "keep doing the good stuff!"

Reflecting on the last few weeks and months, Neil likened the experience to watching an exciting football match - he felt he'd been really enjoying the game, when suddenly he'd found himself in the middle of a fire drill as Lockdown started to have an impact. Through this time, "the safety of Members was of utmost importance," Neil added.

He spoke about the changes that he'd started to make during his year to help the Club "freshen things up and do something a bit different". The first of these was an Art & Craft Fair, hosted together with Inner Wheel. Other innovations included having a meeting in Barham Village Hall (after a Vineyard Tour), having a meeting kick off with fun songs by local troupe the Lemon Zingers, having a specially extended meeting to hear a local historian talk about Lawrence of Arabia, and having a Bat & Trap event. Other events were planned of course, but have been postponed for now because of Covid-19-related uncertainty. Neil also spoke about PP Peter Hermitage's great efforts to spearhead "regenerative ideas" in the Club and attract new members.

Neil gave a big thank you to outgoing treasurer Stephen Thompson for his efforts during the year and for helping to organize the Club's various donations - such as donations to Canterbury Food Bank and the Prince of Wales Youth in swift response to the pandemic. He credited the Club with immediately thinking of "the vulnerable, hungry and disadvantaged" in their actions. He also praised Members for the speed at which they had switched to using Zoom as an alternative to regular meetings - within a space of two weeks!

Neil took this switch to Zoom meetings as an opportunity to decrease some of the formality that the Club had previously had at lunch meetings. "Perhaps," he said, "this might mean future face-to-face meetings, when they take place again, might be de-formalized somewhat."

Welcoming Alan into the new role and wishing Alan luck, Neil wryly told us that he'd now be "taking a bit of a rest". The Club gave Neil a warm but virtual round of applause.

Taking the Club's Presidency and chairing of the meeting over from Neil, Alan thanked Neil for his hard work during the year, especially in the recent, testing times. "A job well done," he said. Speaking with plenty of positivity he told Members that the Club "needs to keep the ball rolling, and keep getting up and getting things done", just as it has done in recent weeks.

Alan encouraged all members to approach him with their thoughts and ideas - "It's your Club, not [Club] Council's!"

Alan then asked Rotary Assistant Governor for our District (1120), Kevin Fielding, who was attending the meeting as a guest, to say a few words. Kevin started by saying "I'm very lucky for the clubs that I'm responsible for". He congratulated Neil and commented on what a great Club Neil had led. He liked the fact that we were embracing change, and encouraged Members to contact him with their thoughts on Satellite clubs.