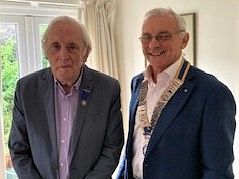 We had a very well-attended Zoom Presidential handover during our meeting yesterday - the 2nd such handover since the pandemic started. This time outgoing President Alan Mepstead handed over to incomer Stephen Thompson.

When we had the virtual handover last year, no doubt few of us thought we would have another such occasion. All was moving along nicely in the direction of us meeting back at the Cricket Ground as we usually do. But it was not to be! Nevertheless, this year's Covid guidelines allowed the two Presidents to be in the same building, with the rest of the Club's Members joining the meeting online.*

Outgoing President Alan Mepstead has had a remarkable year - albeit one totally different to how he had envisaged it. In his last speech as President, Alan reminded us that he was in Australia in February 2020; although people had heard of the coronavirus outbreak by then, few had realised just how much it would affect us all. "The optimists said we'd be back to normal by September and the pessimists said it would all be over by Christmas," he said, adding "now we hope and pray we will be back to some semblance of normality in 3 weeks' time".

Alan recounted how quickly most of our Members had taken to Zoom, and how that had enabled all sorts of things. We'd had a quiz night, panto, murder mystery and Bollywood dancing. Speakers spoke on subjects from Japanese cherry blossom to Bomber Command. We were joined by speakers and their guests from India, Pakistan, Bangladesh, Australia and Mauritius! Over 75 Rotarians, from five European Clubs, had got together for Pentangular, "hosted" virtually by us. We even managed to hold a fundraising charity auction. Together with the Rotary Club of Canterbury Sunrise we lit up St Dunstan's Church and planted crocuses to raise awareness of Rotary's global efforts to eradicate polio; there was even a live broadcast organised by Sunrise. "Another highlight," said Alan, "was my privilege to induct two new members, Shabana & Crispin".

Alan told us that we raised around £20,000 through the generosity of Members (e.g. with their dining funds and donations), other donations, grants, sponsorship, gift aid and more. This money has been used to support a number of local and international causes.

Our International Committee, for example, has overseen donations to a school in Juba, South Sudan, and to Bangladesh (through the Rotary Club of Dhaka). Our Community Service Committee has supported local charities and some individuals. And our Vocational Committee has been busy in primary and secondary schools/colleges with competitions and, for older students, mock interviews. We helped the English Speaking Union with their public speaking competition and most recently we have run our "Dear Future Self" and Innovation competitions, the latter in association with Canterbury Christ Church University. Peter Hermitage has been busy promoting regeneration - which will "take the club forward," said Alan. Alan also mentioned how we now have three social media accounts to help spread news of our activities amongst the community, both local and international (see below for details).

Sadly, the Club has lost two much-valued Members: Gerald Colson and Alan Forrest. We miss them both. "Our thoughts are with their family," said Alan. Alan also wished any Member with health problems "a speedy recovery".

Alan closed his speech by thanking all the Members of our Club Council, and Club Secretary Lewis Norris, for their ongoing efforts. He thanked Richard Kemball-Cook, Viv Pritchard and Martin Ward for setting up Zoom.

Finally, Alan wished Stephen and President Elect Tony Loughran a very successful "new Rotary year", before handing over to Stephen for his first speech as President.

Reflecting on the past year, Stephen began his speech with the words "It is a cliché, but nevertheless true for us today: Cometh the hour, cometh the man." He remarked that our Club could so easily have folded - but instead the Club had had a very active year. He thanked Alan for his efforts and flexibility. "You were the right man at the right time," he said to Alan, praising him for his support of regeneration and for being a "true advocate of 'Service before Self'".

"I only hope that I will be a worthy successor," said Stephen, before giving Alan a big thank you on behalf of all of our Members and commiserating with Alan: "I know that you desperately wanted to host that last meeting at the Cricket Ground, and we so nearly made it".

Looking ahead to his Presidency, Stephen said "To be quite honest, I am nervous about the whole enterprise" and wryly remarked how, at his Rotary interview, he was told every Rotarian has "a duty" to become President at some stage in their Rotary career. "I wish I could remember who it was that interviewed me!" he said. He joked how his familiy ties with Rotary had been used to persuade him to be President. [Stephen has quite noteworthy ties to Rotary - following his father (who was President in 1971) and grandfather (President in 1947).]

Stephen is looking forward to bringing the Club back together again, enjoying each other’s company and having fun whilst doing that; he expressed gratitude to Peter Hermitage and Martin Ward who are working to set up “combi” meeting facilities at the Cricket Ground, which will enable those not able to attend a meeting to be able to join in by Zoom. It will also enable some speakers to join us at the Cricket Ground by Zoom.

Throughout the year our Club will be following the theme of "The Food we Eat" and we have visits and speakers lined up to help us understand a bit more about what we see on the supermarket shelves and about those food producing industries. "I very much hope that there is something in the programme for everyone," said Stephen, who also reminded us of a very comprehensive series of fundraising events planned by the new Chair of Fundraising, Dee Mepstead, and her committee.

Stephen also reminded us all about the date 9th February 2022 - when we will be marking our Centenary. We will also be hosting the five Pentangular Clubs that year - marking Pentangular's 50th Anniversary! Stephen encouraged the participation of Members and their guests, and also encouraged us all to support regeneration and encourage others to learn about Rotary, get involved in our activities and perhaps join our Club.

"It is going to be a busy year with many challenges," said Stephen in his final words, adding "I look forward to working through them together with you all. We have quite a programme!"

We were joined at the meeting by ADG Kevin Fielding, who praised us on raising around £20,000 in a year so difficult for fundraising; he also told us how much he enjoys attending the meetings of other Clubs (he is a member of the Rotary Club of Whitstable) as he gets inspired by the variety of activities - our "Dear Future Self" one being one activity that he felt particularly intriguing.

The meeting was ended with our usual toast, led this time by Stephen, to "Rotary the World Over".
We are all looking forward to the year ahead.

*Alan started the meeting with some special awards - more about this in a separate article.