Tim, who was accompanied to the lunch meeting by his wife, Maggie, told fellow club members belonging to Rotary was a very important part of his life: “Through the last 50 years in Rotary I have had the opportunity and pleasure of getting to know people from a far wider spectrum than I would ever have imagined.” He added: “Rotary has given me a great deal of friendship and fellowship and has enabled me to be involved in many charities and good causes which I have found very rewarding.” He reminded club members that Rotary runs in the Brett family: “Between me and my father, we have covered eighty-five years of the ninety that the club has been in existence!” 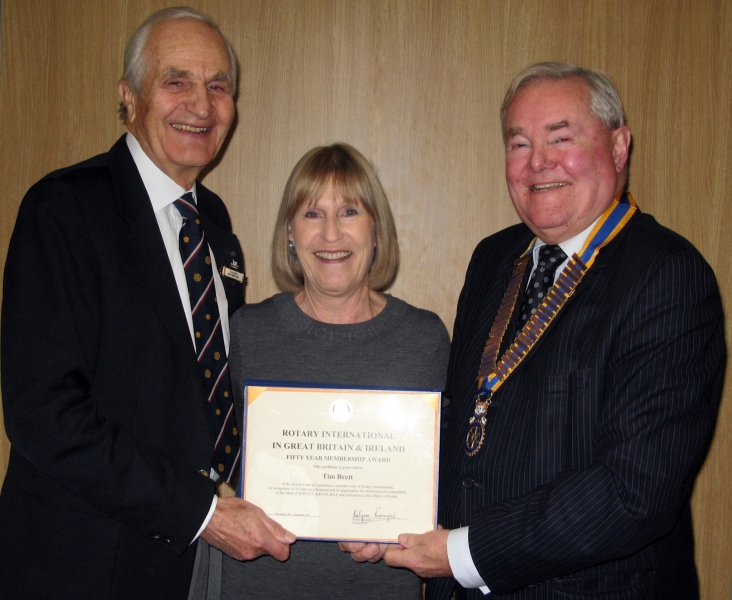 Tim was given an enthusiastic reception by all members of the Club when presented with the framed certificate which was signed by the President of Rotary International, Kalyan Banerjee, who also wrote a personal letter thanking Tim for his 50 years of service to the Rotary movement.

Club President Harry Cragg said it was a great honour to present Tim with his award. He said: “Tim Brett has 50 years of service to benefit our club and the wider community.” He added: “I am pleased that the enthusiasm and commitment of such a loyal member has now been duly recognised.”

Tim joined the Club in 1961 and served as President 1998-99. He remains an extremely active member of the Club, involved in the Club’s Top Choir Kent competition, and is always ready to help with street collections for Charity.