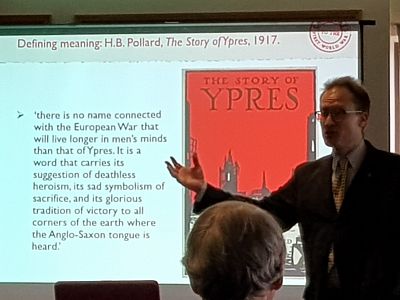 April 22 was the anniversary of the Second Battle of Ypres, fought during the First World War. Last year we were lucky to have author and history expert, Professor Mark Connelly, give us some insight into Ypres after the war ended.

Ypres (a Belgian municipality in West Flanders) played a key role in the First World War (The Great War) because of its strategic position. The renowned  ‘Battle of Ypres’ was in fact a series of five engagements fought between the Allied Forces and the Germany Army – the first in 1914, the second in 1915, the third (Passchendaele) in 1917, the fourth (Lys) in 1918 and finally the fifth (another small series of battles) which ended in October 1918, just weeks before the war ended in November of that year.

Professor Connelly is a Professor of Modern History at the University of Kent. He has a great deal of knowledge about twentieth century military history – especially about the Great War – and has explored the battlefields of Ypres several times himself. During his talk he showed us photos and press cuttings that brought to life the various points he was making.

Ypres, is often said to be “the last great Belgian city not under the influence of the Germans”. But the five battles there took their toll on the city. Many buildings in the ‘devastated zone’ were in left in total ruin, so following the end of the there was an urgent needed to rebuild the area. But many of the people of Ypres had fled during the war (some had come to the UK as refugees, others had gone to other cities such as Paris). The end of the war saw the return of some of the population that had left. The local devastation meant many of those that moved back had to stay in temporary, pre-fabricated bungalows. There was no running water or power supply, so they found themselves living ‘frontier-style’ lifestyles, despite being in the heart of Europe.

Making a living was a challenge for returnees. During the war the Belgians had intentionally flooded Ypres (by opening the locks) to stop the advance of German troops. This had resulted in an influx of salt water into the area; this was so severe that the 1919 Agricultural Commission deemed parts of Ypres so affected by salt water that they would never be farmed. Living off the land was thus not an obvious or easy option – particularly as there was also a great deal of danger from unexploded bombs. However, there was an influx of visitors Ypres from all over the world within months of the end of the war, and with that came a demand for services that the locals could supply.

Large numbers of visitors went from the UK and Northern Ireland. Most, known as ‘pilgrims’ went to mourn or honour the dead. Others were visiting for more prosaic reasons, often wanting to take daytrips out to the battlefields and buy some souvenirs to take back home. The latter were referred to as ‘tourists’. There was lots of discussion about the ‘moral reasons’ for the visits and the British press took a particular dislike to the tourists. One writer didn’t like Ypres being anything else other than sacred. But the local cafes etc were stimulated by the visitors and the opportunities to sell them items. Some Brits had also settled in Ypres; some were ex-servicemen that worked as gardeners etc. In fact, some of the cafes were even owned by Brits. Professor Connelly showed us one interesting picture showing people posing outside a café called the “No Man’s Land Canteen”.

As well as rebuilding homes and offices, there were many other tasks to be done. One was to exhume the bodies of soldiers that had died and re-bury them in cemeteries. The Grave Registration Unit oversaw the exhumation process – relying on a number of methods to identify where bodies may lie. For instance, rat infestation or the sudden appearance of wildflowers often suggested the presence of bodies.

For some of the locals, Yypres was a place where blood was spilled, making it sacred. For others, it had been their home. Unfortunately, this led to lots of tensions among the various people that had settled there. Moreover, Belgians were divided into both Dutch and French speakers, but French was the official language at the end of the war. Many complained that “Brussels was telling them how to live their lives”. The presence of the British settlers also added to the tensions. But over the years, intermarriages led to blended families – reflected in the Anglo-French hyphenated names that can be seen in the cemeteries.

The presence of a large number of Brits and visiting tourists mean a protestant church was needed. This led to the establishment of St George’s Memorial Church. British Imperial infrastructure was also being built around the same time – e.g. the Menin Gate Memorial to the Missing was built and unveiled in 1927. Over 84,000 were estimated as missing (with no known graves) and around 54,000 are named in the hall of memory. The Gate served as a reminder to Belgians of what Britain and the Empire had done to stop them being vassals of the German Empire.

In 1940 the Burghermaster declared Ypres has been rebuilt. Sadly, eight days later the Nazis swarmed into the city.