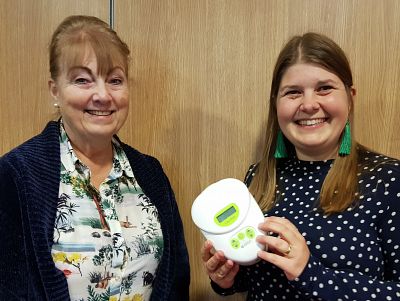 Members of our Club were reminded of the importance of breastfeeding and learned about the support provided by local community interest company (CIC) PSBreastfeeding during our meeting on Tuesday.

Earlier in the year our club was approached by PSBreastfeeding (PSB) with a request to support their work. Members of our Community Service Committee (which focuses on local charities and causes) agreed to donate £450 which covered the cost of three motorised breast pumps.

Lyn Scazafabo and Hannah Croft, who came to talk to us on behalf of PSB, started their presentation by thanking us for our contribution.

PSB is a group of specialists (including counsellors and certified consultants) that support women in East Kent with breastfeeding (they have also been in West Kent since 2014). Lyn told us that PSB was founded in 2007 in response to the limited time health professionals were able to spend with families.

Lyn is one of the founders of the CIC; she is a registered nurse and lactation consultant IBCLC who has over 30 years experience as a women and children’s health nurse. Hannah is a certified lactation consultant who initially started as a volunteer peer-support mum. She later did a number of courses which allows her to do her current work.

PSB supports women and their families in and around Canterbury in a number of ways. Most notably, they run antenatal classes on breastfeeding in Canterbury (which are provided with no charge to the family). They want to normalise breastfeeding and have various materials that encourage mothers to breastfeed, especially outside the home.

Since last July they have been running 'drop-in' sessions at the Oasis Cafe in Watling Street (from 11.30am-1.00pm) that allow women to interact with other women so that they can share their breastfeeding experiences; this is both antenatal and postnatal - mothers are welcomed back once baby arrives. In fact, they also encourage mothers to use the sessions as their first 'outside the home' experience of breastfeeding (something that can be very intimidating for new mothers). The cafe provides an excellent environment where families (often including dads and toddlers) can interact - helped by having access to tea, coffee and cake in the cafe!

Lyn told us that breastfeeding can have a huge impact on the NHS - one report estimates that increased breastfeeding could save the NHS £40 million per year through improved infant health. According to research, there is also evidence that breastfeeding is associated with a decrease in breast and ovarian cancers. Both Lyn and Hannah told us about the importance of maternal antibodies that are found in breast milk; these can be produced by mums and be found in breast milk within 20 mins of encountering potentially harmful bugs. Breast milk also adapts to a baby’s needs as the baby grows - unlike formula milk which is 'static'. Also, the fats in breast milk are specific for human brain growth and development of the human eyes.

PSB believes that it's important to support families to breastfeed. Research shows that the biggest drop off in breastfeeding mothers is within the first 5 days - but most mothers who stopped did so sooner than they had to. Families need to be able to access the right kind of help at the right time for them to be successful. Since PSB started they have recruited lots of peer supporters - mums that have breast fed that support other mums. PSB know that it's comforting for new mothers to talk to others who have "lived" the experience. These supporters, in some ways, have more "street cred" than Lyn might have as an experienced nurse.

PSB has now also developed a breastfeeding peer-support course with Greenwich University which has been taken by large numbers of women. Remarkably, several of these women have gone on to have paramedical careers and it is apparent that the course is providing a route for women to get back into education and employment.

Lynn told us that PSB also runs a pump hire programme  - this allows families to hire pumps at rates much lower than commercial loaners, making them more affordable to families with limited resources. Two of the three pumps that we funded have been out on long-term loans since July and August. Our third pump has supported a 'NICU' (neonatal intensive care unit) baby and also two babies awaiting tongue-tie surgery (tongue-tie babies have an abnormality that affects tongue tip mobility and can affect feeding).

PSB raises funds in a number of ways, including through grants and donations. Lyn also told us about their 'recycling/upcycling bins' situated in various local locations* including some local churches and the Oasis Cafe. (*PSB would like to hear from local businesses happy to have such a bin).

The talk was drawn to an end by Rotarian Maxine Blades thanking our speakers and recounting her experience of visiting one of the drop-in sessions on behalf of our club - "it was lovely to have seen three families with tiny babies together with dads and children," she said, and congratulated PSB on their work.