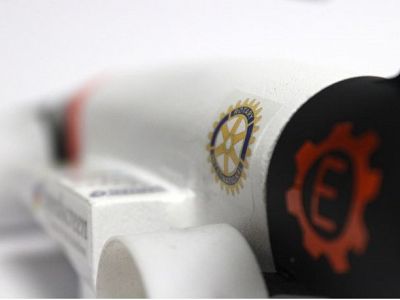 At the end of January five Members of our Club visited the CDT department of Queen Elizabeth's Grammar School (QEGS) in Faversham to inspect its latest entry in the prestigious F1 Grand Prix (GP) car competition.

Regular readers of our news will know that we have previously reported on the schools efforts in the competition – a global competition in which youngsters build model Formula 1 style racing cars. In 2018 we reported how a team from the school attended the national finals and won two awards. Here, Rotarian Brian Dobinson, tells us of the latest visit:

The teams have to design and build miniature racing cars complying with a strict specification which is changed each year, just as is the case with full sized GP cars. A fully detailed dossier of designs and developments has to be prepared and presented to the judges together with a pit area, publicity, and team uniform. The model cars are then raced against each other - although performance in the race is only one element in the eventual awards. Regional heats are held in February, with a national final in March.

In the last two years, the school’s teams won their regional heats and came 5th and 7th respectively in the national final. Winners of the national finals compete against each other in an international event. We were shown an impressive video of last year’s event.

This year’s QEGS team consists of three members, its leader has been a member of the school’s team for the last 4 years. All team members impressed the visiting Rotarians with their knowledge and enthusiasm; their supervising teachers, Dept head Phil Harvey, and teacher Bethany Butterworth, seemed justifiably proud of them.

The major innovation adopted for this year’s car is to construct it with a monocoque centre section with separate bolt-on ends. This enables experiments to be made with up to six different sections for each end without having to build a complete car for each variant, making it possible to test a far larger number of alternatives than would otherwise be the case - a neat practical solution that was suggested during a conversation with a real full-size racing team.

We handed over a cheque for £200 by way of sponsorship for what is obviously a very worthwhile scheme, and were told we would be invited to the national finals at Silverstone – if the team succeeds in getting there.

Subsequent to the visit we were delighted to receive a letter of thanks from George Stonor, Team Principal of the ‘Evolve’ team, together with a photo of their model with Rotary branding. In his letter George states: “The continued support of the Canterbury Rotary Club has been a vital component in Evolve's success and we hope that we shall continue this trend. Presenting to your group was also very helpful in preparing us for the verbal presentation, a key part of the judging.” We certainly wish the team every success and hope they make the national finals.