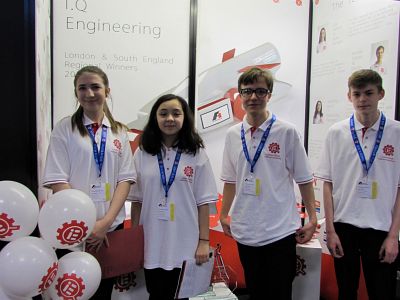 A group of six Rotarians recently visited Queen Elizabeth’s Grammar School in Faversham to hear about a project building model Formula 1 style racing cars, a project to which we have now offered some sponsorship.

Earlier this year when visiting the school in connection with the Innovation Competition (which our Club runs), one of our members was approached by a student asking if we would like to inspect work in connection with the 'F1 in Schools' engineering competition'. This is a global competition involving over 40 countries that encourages youngsters to get involved in engineering.

The offer was taken up on 22nd November when a party of 6 Rotarians (Gill Dixon, Les Stephenson, Alan Mepstead, John Hill, Raj Dasan and Brian Dobinson) visited. They were so impressed by the work and the enthusiasm of the youngsters for technology and engineering that they agreed to provide £200 sponsorship for this year’s entry into the competition. (It is part of the conditions of the competition that the teams raise their own funds).

The Queen Elizabeth team were previously 5th out of 40 in the London and South England heats. This year they aim to win their heat which would enable them to compete in the National finals held at Silverstone. A win at Silverstone would put them into the international competition. Only 30% of the marks are awarded for outright speed, with the rest of the marks being given for qualities of organisation, design dossier, workmanship and so on.

Six pupils at the school form this year's team - three from last year’s team (who are about 17 years old) plus three younger ones. As part of the competition, students design and manufacture a miniature Formula 1 (F1)-styled car using computer-aided design and manufacturing (CAD/CAM) and engineering skills. They use 3D printing for some parts, a laser cutter for others. All aspects of the design are carefully calculated and recorded in a meticulously kept dossier. The team members also design and make their team uniforms, posters and other publicity and related activities. This year the team has ambitions to reach the final. They also want to leave a legacy of engineering at the school to inspire the next generation of students - hence the team was called 'Evolve'.

Each team member has a separate role - manager, chief engineer, financial organiser etc. The youngsters showed our members a video and described their different roles and responsibilities with huge enthusiasm. They then showed us last year’s car - running on their electronically timed test track!

After that our members toured the CDT dept at the school with the head of the Technology and Art Faculty, Phil Harvey, technology teacher, Bethany Butterworth, and art teacher, Chris McDermott.

Our members really enjoyed the presentation and tour and had a good chat with the children (which we understand was much appreciated). The verdict from us was that the youngsters (and their teachers) were full of enthusiasm and professionalism, which was uplifting and something this country could be proud of.