A fun-filled quiz night, with guests 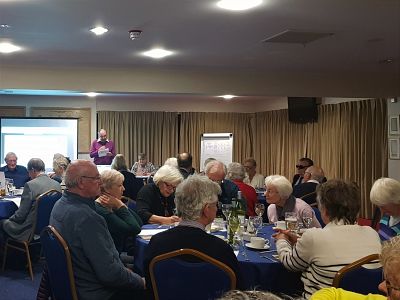 We had a packed room last night at our Quiz Night, with plenty of guests joining our members for a evening of cerebral challenges, fish & chips plus a good dose of fun. We also raised over £300 from our raffle for the great causes we support!

We were lucky to bag quiz master PP Ian Wright, a former member of our club but now with the Rotary Club of Dover. He started by telling everyone that it was "really good to be back amongst old friends and colleagues." As ever, Ian set a nice lot of challenges for the teams (with each table forming a team).

Rotarians could be found pens at the ready as each question was asked - with themes ranging from "Numbers" to "Pot Luck".

Ian kicked off with his first "Numbers" question. It was an easy starter: "What is half a baker's dozen multiplied by half a score?"* But the next challenge had a few members scratching their heads - "Add together the number of pounds sterling in a monkey bet with the number of pounds sterling in a pony bet"! More questions of a numerical nature were asked before answer papers for round 1 were swapped, marked, scores added to the on-screen tally board and we moved on to round 2.

They say one should never discuss Politics & Religion at dinner, but there was plenty of discussion among team members on these topics during the second round which was on this theme. Questions started with: "Who was the 'Leader of the House' before the recent general election?" ... there were mumbles of "Rees Mogg" and others before Ian corrected himself (to the sound of jovial ribbing from the floor, reminiscent of that heard in the House of Commons during PMQs) to "Who was the 'FATHER of the House' before the recent general election?"

More questions of a political and religious ilk followed.

Next up was the "Sports & Games" round. But the cricket-loving fans sitting in the Cornwallis Room in the Kent County Cricket Grounds didn't have a single cricket question to answer. Instead, questions were about football, basketball and other sports. The "games" questions tackled those in the room on their gaming and observational skills - for instance, "What is opposite 'Go' on a Monopoly board?" There were mumblings among teams of "Community Chest?" or "Jail?" - but these weren't right!

During the interval a meal of "Fish & chips" (or veggie alternative) was enjoyed by all of those present before the quiz re-commenced.

Ian then moved on to "Geography" - this seemed to be the topic that most teams were confident about, with plenty of Jokers (which doubled scores for the round) being played. Some of the questions were trickier than expected, and there were lots of groans when it came to marking the round and being told the correct answers.

The next round was on the years 2018 and 2019, testing participants on relatively recent news events - for example, "What series of events that hit the world news occurred in a place called Mae Sai?"

The penultimate round was on acronyms and spelling, with the audience being quizzed on many familiar acronyms and even more familiar words with tricky spellings.

Ian ended the quiz with a last round of "Pot Luck" questions, covering different aspects of general knowledge.

After Ian's closing question, answer sheets were collected up and final scores were rapidly tallied by the team of "tellers" (working at a speedy general-election pace) while President Neil Fraser conducted the raffle.

Finally, to much mirthful suspense, the table winning the quiz was announced. Team members were congratulated with a warm round of applause. Each member of the team got a treat to take home with them. Neil thanked Ian for running the quiz so well and also thanked PP Sharon Jordan and others for keeping the "on-screen" scores and supervising the final count. There was also a quick tot up of evening's raffle, which raised over £300 for the causes and charities we support!**

**Thanks to all that donated raffle prizes. The money raised from the raffle will go to local and international causes and charities that we support.