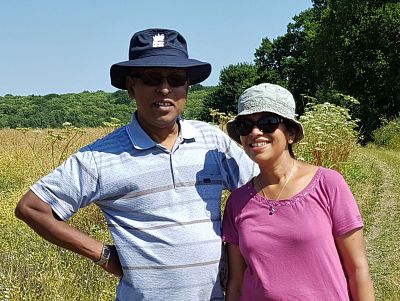 Our members have a wealth of experiences between them, and it's always nice to hear newer members tell us about their life and career. Recently we had the pleasure of hearing from Rotarian and engineer Raj Dasan.

Raj is originally from Sri Lanka, but moved to this country in the late 1960s in order to further his studies. Those of us who know Raj as an engineer were surprised to learn he originally trained as a nurse, and worked for some time with mentally and physially handicapped children. Although a worthy job, Raj felt it was not the right career for him and subsequently changed his career to engineering. He studied engineering at Hatfield Polytechnic and then in 1995 he completed a Master's degree in structural engineering at Kingston. Right from the outset Raj played a role in some very interesting projects - in his first job he was involved in the design of bridges along the M25 motorway.

Raj later went on to join the Greater London Council (GLC), working for Highways & Traffic on various projects such as the Malden Underpass. Following a promotion he moved into another department where he was involved in the design of the Thames 'Barrage' as it was then known - now, of course, the famous Thames Barrier. He then moved to work for local authorities and was involved in the development of underground chambers for pumping stations. Around 1988 he joined Canterbury City Council as a Senior Structural Engineer. His main role was to advise various departments looking after buildings and bridges.

Canterbury became the lead authority for other councils and Raj joined the team. There he became involved in sea defence and beach replacement projects. For instance, electronic pebbles allow prediction of how often a beach needs replacement. He was also involved in a variety of small projects in the Canterbury district - for instance, giving advice on the Marlowe development, Kingsmead development, and on the repair of buildings suffering 'concrete cancer'.

Raj is also a member of the emergency response team for flood defences and a few years ago had to organise the distribution of sandbags near Whitstable Harbour.

Raj retired last year and, just over a year ago, joined our Club. Since then he has been actively involved in our work, most recently organising volunteers to man our 'Duck Stall' in the build up to our Duck Race on Saturday 8th September.