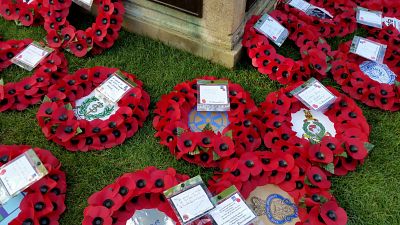 Members of our Rotary Club joined representatives of other Canterbury Rotary Clubs at the Remembrance Day Ceremony in the City Centre yesterday to commemorate and honour servicemen and women who sacrificed their lives to secure and protect our freedom.

Participating in the Parade were our Club's President Sharon Jordan (who carried and laid the Rotary wreath on behalf of the three Rotary Clubs), Christopher Jackson (President of the Forest of Blean Club), and Nicolas Rennie (representing the Sunrise Club) together with Past President Geoff Goodban from our club and others.

Representatives from various regiments and associations, including The Queen's Regiment Band, The Prince of Wales's Regiment, The Buffs (Royal East Kent Regiment), The Royal British Legion, the Police, Ambulance Service and Fire Brigade, Army Cadets, RAF Cadets, Police Cadets and many more were also in attendance.

Others present at the ceremony included The Lord Mayor, Rosemary Doyle and other civic dignitaries. The Lady Mayoress, accompanied by her husband Robert Yonge (Past President of our Club), were also in attendance, as were several former Lord Mayors (including Lewis Norris, another Past President of our Club). The ceremony was attended and watched by many veterans, members of the services, cadets and members of the public. Our immediate Past President Martin Ward and his wife Jayne were also in attendance.

After the wreath laying ceremony people gathered in the Cathedral for the Service, which was taken by the Dean, Robert Willis (who is an honorary member of our Club) and presided over by the Archbishop of Canterbury, Justin Welby (who gave the blessing at the end of the service). Despite the cold day there was a good turnout for the ceremony and wonderful service, with the Cathedral being packed.

At 11 am on the day, the 11th day of the 11th month, a two minute silence was observed to remember those who had lost their lives.

After the Commemoration President Sharon said, "It was a privilege and an honour to represent our Club by forming part of the parade, which was well attended by the different services."

Picture: Our wreath among others at the foot of the War Memorial. Picture Credit: Sharon Jordan.