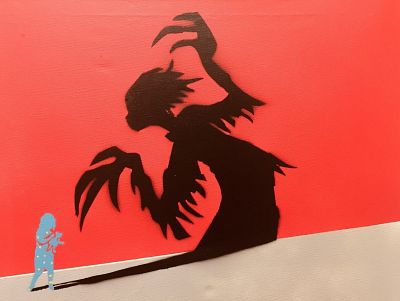 Our Club has supported the Rising Sun Domestic Violence & Abuse Service (based in Canterbury) continuously for many years.

The charity supports women and children affected by domestic violence in Canterbury and East Kent. Our Club’s support has helped cover the charity’s call centre service, the women’s refuge, and other services.

One of the charity’s important activities is the support of children of families that are suffering upheaval as a result of domestic violence and abuse. The charity has recently worked with a group of adolescents to explore their views on positive and healthy relationships. An exhibition currently being held in the Front Room at The Beaney, entitled Changing the Pattern: the Next Generation, shows art work developed by the youngsters with Rising Sun.

One of our Rotarians, Richard Kemball-Cook has recently been volunteering with the teenage boys’ group: these youngsters all come from families where there has been some experience of serious abuse and one partner may have been excluded (probably under a court order) as a result.

Youngsters in such situations are often traumatized by the ongoing family situation and may exhibit behaviours that can be challenging for schools, the remaining parent and others. There is evidence that youngsters in this situation may go on to be abusive themselves. The Rising Sun teenage boys’ group aims to change such negative behavior patterns and break the abuse cycle.
Richard will be at the Beaney on Thursday 7th December from midday onwards.

Photo: One of the pictures at the exhibition. Picture credit: Richard Kemball-Cook/Rising Sun.