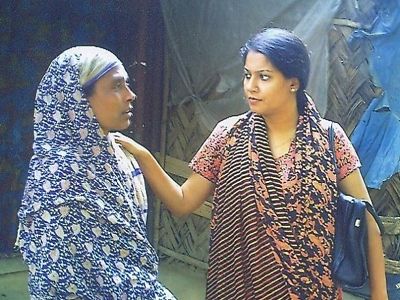 It was a true privilege to have award-winning lawyer Syeda Rizwana Hasan, Director of Bangladesh Environmental Lawyer's Association (BELA), talk to our members about Environmental Justice.

"Environmental Justice" sounds a powerful phrase. But few of us realised just how extensive it is - and how important it is to a developing country like Bangladesh, the south Asian country where Rizwana is from.

Rizwana is an attorney and, as mentioned above, currently heads Bangladesh’s Environmental Lawyer’s Association (BELA). In 2009 she was noted as one of the “Heroes of Environment” by TIME magazine, particularly for her work on ship-breaking.

Both she and her organisation have received prestigious awards and honours for their work, including: The Goldman Environmental Prize in 2009. The Ramon Magsaysay Award in 2012, and The Tang Award just earlier this year.

Rizwana started her talk by focusing on the phrase "Environmental Justice", telling us that as yet there is no globally accepted definition. However, it does encompass civil, political, social, economic and cultural rights and third generation human rights.

She went on to give us some information about Bangladesh to set the context of her work. We learned that Bangladesh is the 8th most populated country in the world and that it has scarce land resource - one of the lowest in the world at around 0.06 hectares/person. The demand on land has grown in recent years with the Rohingya influx (leading to Bangladesh, an already over-populated, resource-poor developing country, now hosting 4.7% of the world's refugees).

The people of Bangladesh are very dependent on natural resources, with almost half of the workforce employed in agriculture. Bangladeshi forests support more than 19 million people. Much of the population is dependent on fish as the only animal protein intake, so fishing and fisheries are very important to the population.

Most of us hear of Bangladesh in the context of poverty and natural disasters, but Rizwana reminded us that Bangladesh should not just be associated with this. Bangladesh houses the picturesque Sunderbans region, a beautiful mangrove forest which is home to the royal Bengal tiger. The country, which borders India and Myanmar and lies close to Nepal, Bhutan and China, also has the world's longest unbroken stretch of sea beach at Cox's Bazaar, along the Bay of Bengal. It also has around 250 internationally-shared rivers - the largest and most well known being the Ganges, that travels down from the Himalayas across India before entering Bangladesh (where it is known as the Padma river).

This extensive network of rivers, and the fact that much of Bangladesh is low-lying, makes the country very vulnerable to climate change. Rizwana showed a map that outlined the area of Bangladesh that is just 1 metre higher than sea level. Alarmingly, climate change leading to a rise in the sea level by just 1 metre (possibly in 2050-2075) would permanently inundate this area - almost one-third of the county!

Meanwhile, Bangladesh is at threat from withdrawal of water by dams in neighbouring India. We were told that the Padma used to be one of the highest rivers in Bangladesh - but now in places is a dry riverbed. To illustrate this point, Rizwana showed us a picture of a bus being driven through the parched and dusty bed.

Living conditions for the people of Bangladesh are not good - she showed a 2019 news headline stating that Bangladesh was the "3rd worst liveable city" in the world. She also highlighted problems faced in urban areas, like its capital city, Dhaka. She showed pictures of terrible air pollution and a picture of floods in the city, with cars and cycle rickshaws struggling to travel through knee-to-thigh-high water during recent rains. She also showed a picture of a sign assuring road users that the road beneath another flooded road was "usable".

Rizwana told us how the rural environment of Bangladesh had changed rapidly over the last few years. Bangladesh was once known for its vast spans of bright green paddy and large expanses of water. But Rizwana showed us how the global market for sea food such as prawns and lobsters had changed the landscape - with almost a fifth of agricultural land now used for export-orientated sea-food cultivation. (In one question asked later, Rizwana told us that while the small-holding farmers had initially been happy to lease their land this way, in the long term it was now causing them problems as the water used is saline water. This increased salinity in the water has in turn led to an increase of blood pressure among the rural population (especially pregnant women) and difficulties in providing water for domestic cattle and poultry. She told us that when she visits these rural places now, one of the first complaints she hears are elderly women telling her they no longer have eggs to eat - another vital protein source for the rural poor.

We learned that Bangladesh has chosen a "high carbon development path" - with coal-based power plants being a major environmental concern. One plant, Rampal, a joint project with neighbouring India, is right next to the Sunderbans.

Rizwana also told us of a joint project Bangladesh has with Russia - a nuclear power plant. From these examples our Members understood that geopolitics and the political economy both have an enormous role to play in Bangladesh.

Rizwana went on to outline some of the legal battles for Environmental Justice in Bangladesh. She explained that, like many other developing countries where populations are struggling to survive, the environmental arguments in Bangladesh are largely "anthropocentric" (centred on humans) rather than on wildlife.

Some of the largest battles focus on protection of wetlands (threatened by canals); protection of forests and forest dwellers (apparently, in Bangladesh the rate of deforestation is one of the highest in the world); industrial pollution (e.g. rivers polluted by tanneries); the regulation of urban development (which threatens parks and playgrounds used by families and children); plastic/polythene pollution; food sovereignty (e.g. threatened by the use of glyphosate, a chemical used by agro-giants in pesticides) and good governance, especially in the garment industry.

Rizwana then told us about some of the work she has done on shipbreaking, for which she and BELA have received awards. Countries often send their old ships to Bangladesh to be broken down. But these vessels are full of harmful materials and chemicals, and shipbreaking is a risky business for workers who often do not have the appropriate equipment or training to carry out their work. BELA fights for proper implementation of laws and improved worker's rights and conditions. Rizwana showed a picture (see picture) of her comforting the mother of an eighteen-year old who had lost his life while working at a shipbreaking yard. She told us that there were many international and local laws, but often these were not enforced or were circumvented in some way. For instance, ships might change flags during their outward journeys before ending up in Bangladesh. She implied that sometimes countries sending ships out were complicit in this by intentionally "not asking questions".

Rizwana told us how BELA works closely with other organisations to move their work forward. These networks are vital to environmental justice and, in fact, BELA is reliant on funding from bilateral development partners such as UKAID, SIDA, NoVIB and so on.

Rizwana mentioned some of the awards and recognition she and BELA have received. She also reflected on some of the strengths of her organisation, including its focus, networks, bottom-up and legal approach, integrity, credibility and teamwork.

Finally, before a very vibrant Q&A session, Rizwana touched on some of the challenges that she and BELA face.

Our Members were left with the impression of a very impassioned and hard-working individual, who was leading a team that were dealing with a wide range of serious environmental issues. These issues are hugely important both for Bangladesh and for the world as a whole, and it's really important that the world takes notice.

Picture: Rizwana comforts the mother of an eighteen-year old who had lost his life while working at a shipbreaking yard in the coastal region of Bangladesh. Picture credit: BELA.