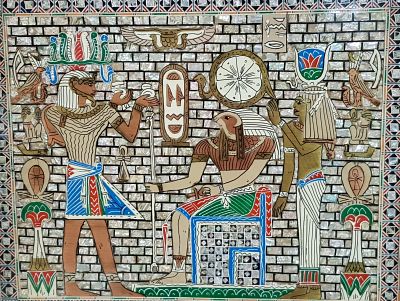 What could Westgate Gardens possibly have in common with ancient Egypt? Well, that topic and others were discussed by Rotarian Rosemary Doyle during her talk to us.

Rosemary started her presentation on that very topic of Westgate Gardens – in fact it was the reason she was giving us the talk! Apparently, Rosemary had been chatting with fellow Rotarians at one of our pre-Covid-19 lunch meetings when the conversation turned to flooding at Westgate, and the fact that this had, seemingly, improved the growth of plants on the riverbank. This led Rosemary to comment that, historically, Ancient Egypt had also benefitted from flooding – this time from flooding of the Nile, one of the longest rivers in the world and the longest river in Africa.

Rosemary had studied Egyptology at University and was encouraged to talk to our Members about the subject. She told us it had been “a great pleasure” to have had to delve into her old books again (in preparation for the talk).

Rosemary started by setting the context for her presentation. We learned that the Nile actually flows northwards through Egypt, fed by the monsoon rains that fall on the Ethiopian highlands in the south. Showing us a map of the region, she told us how the Nile flows from the cities of Aswan to Luxor, then through vast flood plains of Egypt (and passing through Cairo) before reaching the Nile delta.

We learned that in June of every year the Ancient Egyptians had noticed that the river increased in size; in fact, they had even devised “Nilometers” to gauge how high the waters were during the annual flood season. Showing us a picture of one at Elephantine Island in Aswan, Rosemary explained how the step-like structure used to be used to assess the river’s depth. If it looked as if the water levels were getting very high, the Egyptians would send out messages to warn people of floods. On the other hand, if levels got too low, they would release grain stores (in preparation for drought and consequent famine). The annual flood, which brought nutrient rich waters to the land, was very important – so much so that the Egyptians even had a deity, Hapi, as flood god.

There were three seasons associated with the river, which reached its full height in September: Akhet (inundation), Peret (growth) and Semu (harvest). The flood waters would deposit lots of silt from the mountains, enriching the soil. As the water retreated it left behind land that was ideal to grow crops. The fact that the flooding peaked in September meant that the Egyptians could grow their crops outside the full heat of summer. Their crops included barley, wheat and spelt, which they used for products such as bread and beer.

At the time, most nearby countries relied on subsistence farmers who grew just enough to meet their own needs. The wealth of crops in Egypt, however, meant that the Ancient Egyptians could feed those not farming – such as artisans and craftsmen. This meant that they could build and decorate magnificent structures, like the wonderful painted tombs that we all know Egypt for.

In Ancient Egypt, Rosemary told us, all things had a religious significance. At the time, the Nile had no name – it was just known as the river. But the Egyptians would regularly offer prayers to flood god Hapi. An ancient poem or prayer refers to water being their greatest treasure – more valuable than silver or gold. The Egyptians were also terrified that the sun might not rise, so the sun god, Ra, was also worshipped; hieroglyphs often show offerings, such as loaves of bread, being made to these gods.

Although the economy benefitted hugely from the Nile, the Egyptians had to manage the waters. They therefore built clever systems of canals and reservoirs that allowed them to irrigate the water when river levels had subsided. A lot of complex science and engineering went into this. Often, this meant that they managed to get a second crop, such as peas and beans, on the land before the intense heat of summer destroyed it all.

The surplus foods allowed the development of local culture. As we all know, the Egyptians made lots of public art works and both art and culture were able to flourish in times of plenty.

The agricultural reliance on natural flooding (with the associated risk of total crop destruction by waters that were too high) continued until the building of the Aswan (low) Dam in 1902 to control the waters. In the 1960s Lake Nasser, a vast reservoir in southern Egypt/Northern Sudan, was built – one of the world’s largest man-made lakes. Not only did this require temples to be moved, but it changed the entire ecology of Egypt, and the “black lands” (so called because of the dark silt) changed in nature. The natural fertilizer brought by the river no longer came to the fields and Egypt, once “the granary of the Roman Empire”, changed.

Finally, Rosemary reflected briefly on the floods and how the Ancient Egyptians who relied so heavily on them must have felt when the river swelled – “It must have been a truly remarkable sight”, she said.